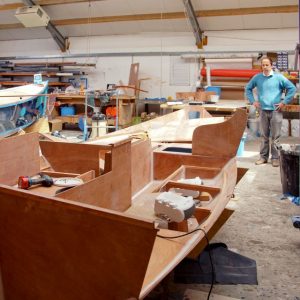 Seatern is Built: Seatern was ordered in October 2012, soon after the Southampton Boat where Swallow Boats had taken a number of orders. As a result the build did not start until May 2013, and she was not delivered until the end of December. I visited Swallow Boats three times during the build and spent my time choosing equipment and building the electronics unit (as well as sailing my Seafly and Lightning dinghies).

Seatern Diaries > 2013 > Introduction > Seatern Build: Introduction
Because we use Google Maps and other services, using our site may place cookies on your computer. If you continue to use this site we will assume that you are happy with it.Ok