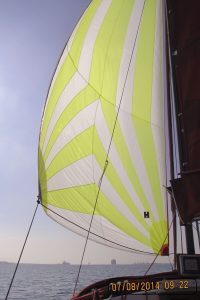 Neighbour Jon Tipple turned up early at 0745 and we left the jetty at 0850 getting the mast back up while motoring down the river. With only a slight wind showing on the water I started emptying the ballast tanks while passing Ocean Village. 0835: hoisted sail off Woolston and, soon after once the tanks were empty, furled the jib and hoisted the asymmetric to starboard. What little wind there was came from behind and we tried goosewinging with varying success. Nearing Hamble Spit I headed more towards it on port so as to gybe onto starboard to cross the boats coming out of the Hamble on their way to Cowes. 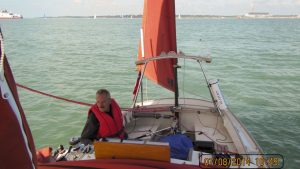 My intention was to avoid the Cowes Week fleets as much as possible by staying close to the Hampshire Coast in the eastern Solent. However we found ourselves ahead of and upwind of a larger yacht (“Arctic Tern“!!!) which was flying a large light weather genicker and no main and heading towards Cowes. Seatern was slightly faster if I headed up but slowed too much if I tried to bear way. Not wishing to cross too close to the bow of Arctic Tern I decided to carry on towards Cowes since it would later give us more of a reach. I managed to get ahead and then to leeward before the North Channel and bore away on port before gybing back onto starboard some distance off Hill Head. 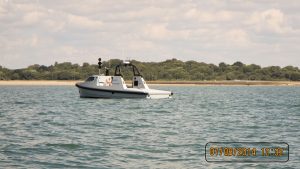 The winds were still light but there were signs it might increase so I refilled the ballast tanks. Around 1230 we passed an odd looking launch displaying “restricted ability to manoeuvre” shapes (photo). I’ve since discovered that the Halcyon is an Unmanned Surface Vessel designed to blow up mines! The wind dropped again as we were level with Gilkicker and then increased and backed. I was pleasantly surprised to find that we could fly the asymmetric even on a close reach. However we were eventually faced with either changing back to the jib or gybing round and starting back to Southampton. 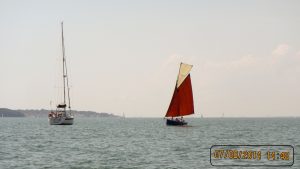 Knowing that the current would be against us on the way back, at 1340 we performed a rather chaotic gybe and started the broad reach back still flying the asymmetric. The wind dropped off a little and although we were moving well through the water, our over ground speed was decreasing. We therefore headed inshore until, with a swimmer close by, we gybed again towards home. This doubled our progress speed. We passed a gaffer with an unusual looking topsail and a bit further on I decided to pump out the tanks again – where upon the wind started to increase and head us. Having been hit by a gust it was time to drop the asymmetric during which I lost hold of the tack line – I think it needs a better cleating arrangement. However the sail came down under control and just in time! With a freshening wind we flooded the ballast tanks and started beating back. 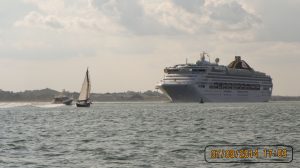 It was a similar situation to the 31st July in that we were carrying too much sail, but anticipating less wind once in Southampton Water. I stood on for a little while before bearing away at 1625 and reaching down Southampton Water at 5 to 6 knots. Several motor cruisers passed heading up the Hamble after Cowes, and the Oceana was coming out of Southampton. P and O describe here as “mid-sized”!

Stopped off Weston to drop sails and spent about 15 minutes trying to start the outboard. I think the mistake was using the choke. We got back off the jetty by around 1830 which was too early for the tide, so left the mast down and motored up to Woodmill. I realised I’d never been up there before high tide before! Back at jetty by around 1930 but packing up was delayed while I helped neighbour Mark by towing his boat back to his jetty using the Torqeedo on the Seafly.

Footnote: I was surprised how few boats seemed to be racing off Cowes, and we did not encounter any racing fleets. It turned out that the races were cancelled for most of the classes due to lack of wind. Wimps!

Seatern Diaries > 2014 > August: "Avoiding Cowes!" > 7th August: E Solent under Spinnaker
Because we use Google Maps and other services, using our site may place cookies on your computer. If you continue to use this site we will assume that you are happy with it.Ok