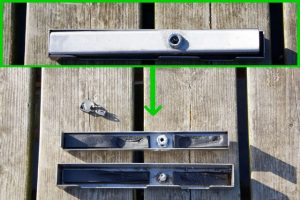 With cold weather forecast for the coming week and the daylight hours still short, I decided to get the outboard serviced. To unlock the outboard and lift it onto the jetty I need the tide in and not too near neaps. When it had it’s “end of running in” service in the middle of June 2014 I’d had difficulty in unlocking it (despite having lubricated it with lithium grease when I fitted it). This time I spent most of Saturday morning trying to unlock it but to no avail. With the tide going down I applied yet more penetrating oil and left it for Sunday. 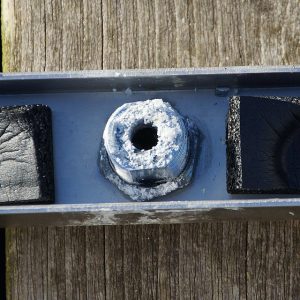 On the Saturday I’d broken one of the keys in the process so I drilled the remains so I could insert a nail through it and exert some leverage. However on the following morning the lock still would not budge. I decided to drill out the lock and, despite doing it carefully to avoid getting metal shavings everywhere, was able to do that using a small battery drill in under 5 minutes! I’d bought the lock from Force 4 who advertise it as “Stainless Steel to provide years of protection against rust and corrosion” However the internal lock mechanism was clearly not stainless being easily drilled and showing signs of “fizzing”. It was not capable of providing protection against rust, corrosion, or a thief!*. If I’d been stealing the motor I reckon I could have removed the lock in less than a minute.

Today (Monday 19th) I took the outboard to the Rib Shop to be serviced. With the engine off Seatern I used the chance to lift the cockpit teak grating and clean underneath it. I expected lots of bits of treasure hidden there but, apart from dirt and lots of hair (?), all I found was an M3 nyloc washer and, inexplicably, a drawing pin! The grating seemed to be in good order. It fits so well that I had to remove the locker lid catch in order to lift it.

* Note added 26th January 2015: to their credit, when I took the drilled out lock back to the Bursledon branch of Force 4 where I had bought it about 18 months previously they immediately offered to refund the cost in full.

Seatern Diaries > 2015 > About Seatern > 19th Jan: Outboard lock problems
Because we use Google Maps and other services, using our site may place cookies on your computer. If you continue to use this site we will assume that you are happy with it.Ok