Outboard Gear Lever: The long gear lever (see 10th March entry) proved impracticable. My idea was to lift the tiller and steer with the outboard but it was all too clumsy. Now I have shortened the gear lever so it fits under the tiller and the result is really good! 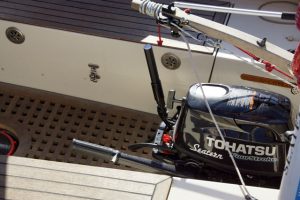 While “docking” the gear lever comes readily to hand without having to bend down and loosing sight of what’s happening. For some reason the gears feel more positive when operated with the lever attached – it’s much easier to find neutral than just using the little lever on the motor.

[Note added August 2017: while servicing the outboard during last winter the Rib Shop adjusted the idling so that the motor now will run much slower. This has alleviated the problems I used to have when docking Seatern.] 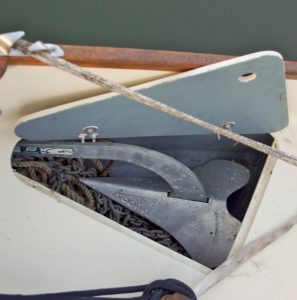 Anchor strakes: I deploy the anchor over the starboard bow and I’ve notice that the toe-rail is getting battered by the anchor chain when recovering the anchor. The problem is that, once I start hauling in the chain, Seatern is either drifting or about to drift so I need to be quick. However I also need to be careful how I stow the chain in the locker if I’m to stand any chance of also getting the anchor into the locker. 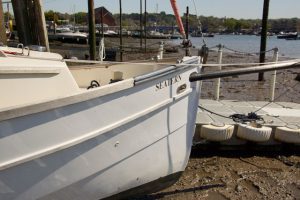 I’ve used some hollow stainless rubbing strake from Baseline Marine. I’m not sure I like the look – reminds me of those vans that collect money from banks. however it’s not so noticeable in real life as in the photo. I need to tidy up the ends still. I’ve also cut indents into the anchor locker covers so the latter can be closed with the anchor warp (or mooring lines) in place. Just having a thumb-hole to open the covers seemed rather impracticable.

Other tasks: have included re-lashing the shrouds so that I can get more tension in the rig using the bottle-screw on the forestay. I also removed the reefing lines from the mainsail since I don’t use them and they are only more bits of string to get in the wrong place!

Seatern Diaries > 2015 > About Seatern > 26th – 28th April: Outboard Gear Lever, anchor strake, etc.
Because we use Google Maps and other services, using our site may place cookies on your computer. If you continue to use this site we will assume that you are happy with it.Ok