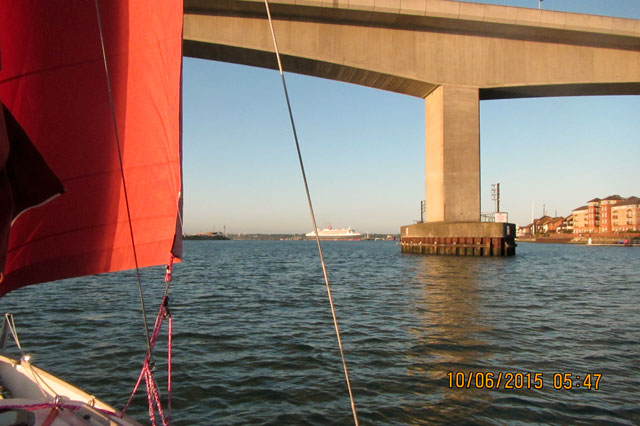 Slept on boat, up at 0330 but somewhat disorganised and left jetty at 0510. Having passed under Northam Bridge heard 0520 shipping forecast suggesting strong winds all day. Last night they had been forecast to abate. Charts show low from France squeezing the isobars, xcweather wind reports showed strong winds from stations over water. Decided to abort trip rather than spend a day under jib and mizzen – especially since the jib sheet arrangement is untried. 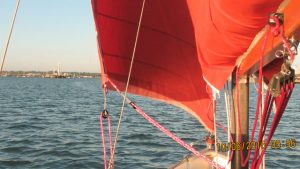 Needing to be back at the jetty before 0820 but wanting to achieve something, I set the jib and mizzen off Shamrock Quay and sailed down the river. It was mainly a run so hard to tell just how well the jib sheet system worked but generally it was disappointing. I think the problem is that the friction of the mast etc. as you tack the jib causes the leeward ratchet block to engage, stopping the jib tacking. More thought needed! 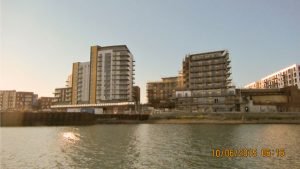 Sailed as far as the new Woolston development where I tried furling the mizzen a couple of times – seems to work well! I’m disappointed in the design of the development though! Given it’s a prime site (the old Vosper-Thorneycroft Works) surely they could have built something more interesting. 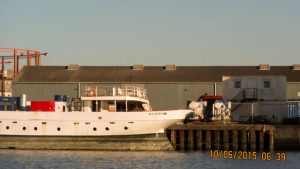 Rather than beat back against wind and current (a thankless task in the Itchen) I furled sail and started the outboard “Dai” to pootle back up the river while I made a cup of tea. The “R/S Eden” which had intrigued me on 12th May turns out to be a “super-yacht” under going its umpteenth rebuild. Back at jetty and tied up by 0800 having covered 4.8nm!

Seatern Diaries > 2015 > June: "is this Summer?" > 10th June: Shortest sail this year!
Because we use Google Maps and other services, using our site may place cookies on your computer. If you continue to use this site we will assume that you are happy with it.Ok