On what turned out to be the hottest July day on record (highest about 29C at the jetty and humid) I decided it would be cooler on the water. Left at 0940 as soon as Seatern would float. There were some strong gusts on the River and I expected to spend the time well reefed. Passing Dibles Wharf I noticed that, having taken all the accommodation off the “super-yacht” R/S Eden, it looked like they were preparing to crane a section back on. 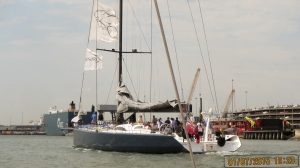 At Ocean Village, Leopard lept out at me! I’d heard on the VHF she was preparing to leave but she was still at the pontoon as I neared the Marina entrance. I looked back at the mizzen and when I turned around she was ahead of me close to Starboard. What Formula 1 might call an unsafe release from the pits! 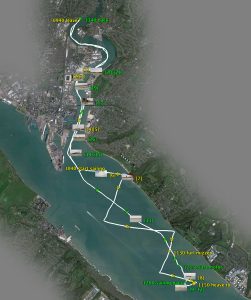 Got the sails up once through the moorings at Woolston and did a tack in towards the Weston Shore. Having then tacked out as far as the shipping channel I came back very close to the shore off Netley Country Park. On the next outward tack I furled the mizzen. It was easy even with Seatern sailing close hauled. Being able to remove the boom is a great help – probably as much as having the roller furling! The wind was not as strong as I’d expected but with convective activity evident from the clouds, I didn’t totally trust it and was keeping an eye out for squalls. 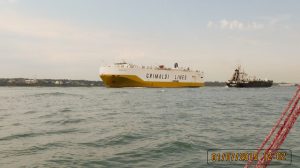 At 1150 I hove to to get lunch from the fridge and to unfurl the mizzen ready for the run back to the Itchen. However during the process the wind dropped almost entirely. This left me stuck on the edge of the shipping channel unable to keep the sails full as Seatern rolled around in the various wakes. Embarrassingly there were ships approaching from either direction. I managed to get Seatern to bare away and start slowly sailing away from the shipping channel as first Whitchampion and then the car carrier Grande Sicilia passed, tossing Seatern in their wakes. 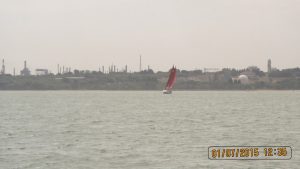 There wasn’t enough wind to have filled the asymmetric so I furled the jib and started Dai, the outboard. After another 15 minutes or so of wallowing I’d given up and furled all the sails. At that point the wind increased dramatically (see the wind plot above)! Given how quickly the short distance back would have been covered under sail, I continued to motor. Over on the Fawley side there was a yacht which appeared to have two mainsails with the forward one almost over the bow with no room for any jibs or other foresails. 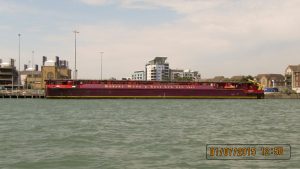 At Dock Head I met the City of Chichester outbound having discharged her dredgings. The moored Auto Bay looked a more sensible design of car carrier with a separate accommodation section forward. Then I passed the very odd looking Terra Marique owned by a firm established in 1863! She really is a unique vessel able to act as a ro-ro roadway, dry dock, landing craft, ship lift…. 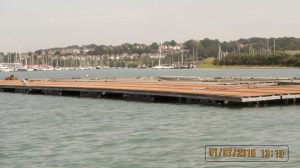 The Boat Show pontoons, stored in the River Itchen opposite the Aggregate Wharves are being refurbished although I wonder how they get the flocks of birds to only roost on the old sections! During the rest of the passage up river I had the Coast Guard helicopter circling back and forth overhead searching for something… somebody… and nearing Northam bridge the RNLI Rib came up behind before cutting back. 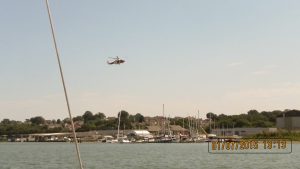 Back at the jetty by 1340, earlier than planned. The wind was dropping again however I managed to get blown past the pontoon on my first approach and had to reverse out and come in again. Total trip: 12.5nm quite a bit of which was motoring.

Seatern Diaries > 2015 > July: "Felt like Summer" > 1st July: Southampton Water on a Hot Day
Because we use Google Maps and other services, using our site may place cookies on your computer. If you continue to use this site we will assume that you are happy with it.Ok