12th October: To Eling at last

At last some settled weather but the tides only allow a single tide sail! Still, the wind direction looked good to be able to sail all the way past the Western Docks to Eling, something the winds and currents have prevented me doing up until now. 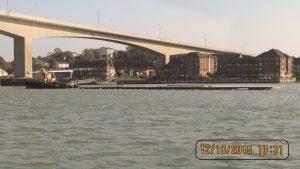 The Boat Show pontoons are being brought back to the Itchen where they are stored until next year and provide a roosting area for many waders. Following them a different dredger, Britannia Beaver was coming in with the Wyeforce standing by. I let them go past before starting to set the sails opposite the old ferry terminal (berth 30). Thanks to the northerly wind, this entailed motoring back up the Itchen and due to the strong gust I had to increase speed to hold Seatern head to wind. I was back past Ocean Village Marina before the sails were set! Anticipating mainly reaching, I didn’t reef. 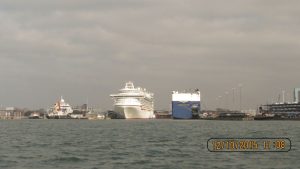 Having rounded Dock Head Seatern was close hauled on starboard but I was able to keep far enough east to allow a departing ferry to pass red to red. A car transporter was sharing Ocean Dock with Venturer – from which a passenger had been lost overboard a day or two earlier near St Catherines Point. To my surprise the Research Ship James Cook was at berth 49 rather than back at home in Empress Dock. 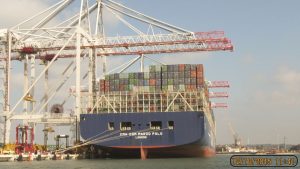 In western docks the sail training ship Lord Nelson was sandwiched between two Grimaldi car transporters – one, the Grande Dakar was the sort that carries containers as well as enclosed vehicles. The CMA CGM Marco Polo, which I’d seen arrive yesterday while on watch in Calshot Tower, was at the new container berth (berths 201 and 202!). The wind off the docks was very gusty and I was having to work to keep upwind of the moored yachts off Marchwood Sailing Club, before I could bear away under the stern of the Marco Polo. 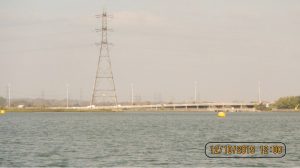 With ships of the size of the Marco Polo and the Hyundai Dream plus the stacks of containers, the winds off the container port were forming back eddies and Seatern would go from beating to running, be becalmed, and then heel to a squall. There was no way I could trust Seatern to the Tiller Pilot, and mostly I daren’t jamb the mainsheet. As a result, on nearing the channel to Eling Quay I was not inclined to try to sail in, nor to spend time furling the sails in order to motor. Also I hadn’t checked the clearance for going under the electricity transmission line although it looked plenty.  [ I’ve since checked and apparently the value given in magenta on the Admiralty Chart, 26m, is a safe clearance distance. If it’s printed in black (as for bridges) then it is the actual air draft at HWS and you would need to add a safety margin for yourself!]. I could have sailed a bit further up the Redbridge Channel side of the Test but the navigable bit ends at the ugly A35 road bridge. 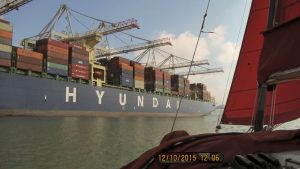 So I turned back and was soon hit by a squall which I didn’t see coming! Seatern heeled way over and broached but there was enough water to windward to recover our course. Then behind the Hyundai Dream the wind turned light and northwesterly so I was running on the “wrong” tack… it certainly wasn’t relaxing sailing! A further complication was an ABP launch running survey lines which I had to provide sea room for. Once clear of the Container Port I let Seatern sail past the western docks with just the jib and mizzen drawing, allowing me to eat the jam roll and banana I’d brought for lunch! 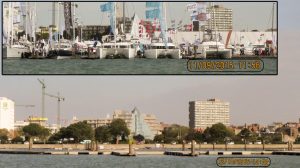 The Boat Show area off Mayflower Park is being returned to it’s desolate state with just a host of piles sticking out of the water. It’s an amazing effort for just 9 days of annual commercial activity. Once past Dock Head, the wind coming down the Itchen Valley had Seatern creaming along at just under 6 knots. I was tempted to sail on but needed to get back for the tide. The Dock Head anemometer had force 4 gusting force 5 which sounds about right given that Seatern was reaching under full sail but in sheltered waters wave-wise. I let Seatern drift backwards more or less head to wind under the mizzen while tidying the sails and preparing for going up the Itchen. 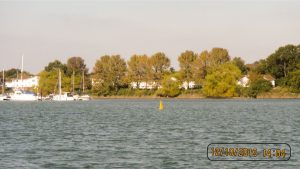 I’ve previously mentioned my relief, when going down the Itchen in the dark, at realising I’ve got past the unlit porthand pile near the Oil-Spill jetty. It seemed impossible to spot until you’d got past it. Someone must have been less lucky since it is now broken off below the water and marked by a yellow buoy… here is a photo. What’s the betting they will replace it with another unlit pile?! [Trip: 15.6nm]

Seatern Diaries > 2015 > October: "I join the NCI" > 12th October: To Eling at last
Because we use Google Maps and other services, using our site may place cookies on your computer. If you continue to use this site we will assume that you are happy with it.Ok