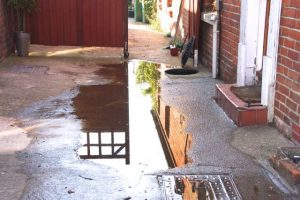 Having the river at the back of your house is wonderful, but it has it’s down sides! My house is on the edge of the area of Priory Road that is prone to flooding. While it is possible (on a 1 in 100 year basis) that the land outside my house may flood, the likelihood of the water being deep enough to cause damage in my house is small. On one occasion the tide line reached the bottom of my back steps but as far as I know, the house has never flooded since it was built sometime around 1900. However when there was a chance of having property level flood protection fitted for free under an EU grant scheme, I was the one to volunteer to have it fitted as a “demonstration”. With sea level rising there will come a time (probably after my lifetime) when houses like mine will be at more risk of flooding. As a retired “oceanographer” I was probably more aware of that than other residents! 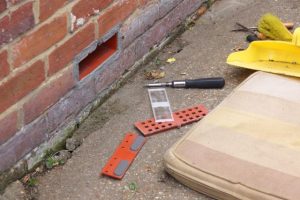 The trouble is, having got protection fitted, it would seem silly not to maintain it! So I’ve tested the “bilge pump” (designed to stop ground water welling up under the floor boards) and cleaned all the air bricks (which lose automatically in case of a flood). I’ve also checked the door barrier seals to ensure they have not been damaged by vermin or other cause. Next week there are 5m tides – about the largest spring tides we get in Southampton – so I wanted to be ready. However it does not look like the weather will cause a storm surge on top of the tides, so we should be safe from flooding this time.

Seatern Diaries > 2016 > Diary Entry > 13-14th Sept: Flood Protection Maintenance
Because we use Google Maps and other services, using our site may place cookies on your computer. If you continue to use this site we will assume that you are happy with it.Ok