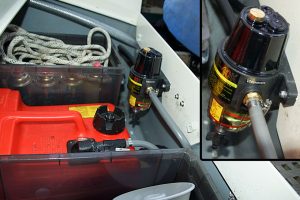 Following the first sail, April was messed up by Easter, a Bank Holiday, and some very cool weather. However I got one or two tasks done on Seatern!

Fuel Filter: I’ve installed a Unikas UF-10K Fuel-water separator filter which is claimed to trap “over 99% of any water that may be present in the tank”. It’s advertised in the States as an accessory for Tohatsu (and other) outboards (the filter is distributed by Tohatsu America Corp.) but I couldn’t find a UK source so bought it via ebay from 411-Marine who were advertising the filter assembly plus a replacement filter for $85. With shipping costs it was about £100.The filter offered by my Tohatsu dealer in the UK was about half that price but significantly more bulky and harder to accommodate than the Unikas version.

To fit the filter implied having a fuel supply hose to the outboard which is fixed inside Seatern rather than simply attached to the external fuel tank. I could not get Tohatsu connectors – those for Mercury looked the same but were different in dimensions. Also I found that ready made hoses were much cheaper than buying the bits. In the end I bought a Mercury male connector for the tank and a Mercury hose to connect between the tank and the filter (with priming bulb). From the filter to the outboard I used part of the old Tohatsu fuel line.

Whether this was all worthwhile or a waste of money remains to be seen! If the fuel additive works as claimed, will mean the filter collects no water… only time will tell! I’ll report back at the end of the summer.

Seatern Diaries > 2017 > About Seatern > Rest of April: (1) Fuel filter
Because we use Google Maps and other services, using our site may place cookies on your computer. If you continue to use this site we will assume that you are happy with it.Ok