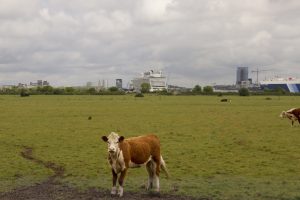 Having sailed around the Dibden Bay and Western Docks area twice already this year, and hearing that there were four cruise ships in, I thought I’d explore the Dibden Bay shore from the land side. However, there are few places where you can get to the shore.

I tried Cracknore Hard but with the tide in I had to hang from an iron fence to work along a wall and have a clear view of the docks. I then parked at Hythe Marina and walked along the footpath that traces the original line of the sea wall before the land “reclamation” project. All that land is owned by ABP and it turns out they allow no access over it; it is presently used to graze cattle. At Hythe Marina Village there is a small “park” area with a built-up viewpoint approached by a spiral path. There is also public access along the southeast edge of the development as far as the lock control building. But there seemed to be no easy access to the Dibden Bay shoreline.* I will have to try again when the tide is out!

Seatern Diaries > 2017 > Diary Entry > 12th May: Dibden Bay Walk
Because we use Google Maps and other services, using our site may place cookies on your computer. If you continue to use this site we will assume that you are happy with it.Ok