The dry spell didn’t last! Having finished cleaning and applying Boracol to the cockpit grating on the Friday (20th), on Saturday night we had a mesoscale thunderstorm system move in from France with periods of torrential rain and battering hail as well as spectacular lightning well into the early hours. I was cowering in Seatern, at least to the extent that, being inside, there was no way I was going to venture into the rain to get back to the house!

On Tuesday the 24th I went with a neighbour, Wendy, to Ashlett and then Calshot. The original plan had been to look around Calshot Spit and then walk to Ashlett for lunch in the Jolly Sailor. However I’d taken the precaution to check whether they did lunch on weekdays and the answer was “not on Monday and Tuesday, and in any case, not this week since the Landlady is on holiday”. So we went to Ashlett first and walked as far as Fawley Power Station. We couldn’t have walked from Calshot in any case because there is a brand new gate across the swing bridge at the power station inlet with a brand new padlock. The path is a public right of way so it ought to be open, it looks like the recent bridge maintenance is now finished. 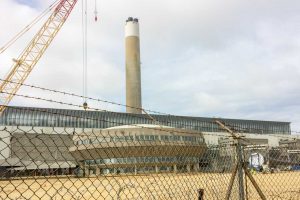 The power station has been used to film various TV episodes and movies. The round flying saucer like power station control room was apparently used to represent the “World Control Center” building in the 1975 movie Rollerball. Also striking, but often over looked is the upper glazed section of the generator hall. 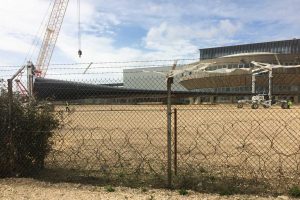 Part of the site is now being used to paint wind farm generator blades which are manufactured on the Isle of Wight. They were moving one while we were there. Sheaved in black plastic the blade dwarfs the personnel in high-vis jackets at either end of its length.

Having returned to Ashlett we drove to Calshot. After a rather too substantial burger lunch in the Sunderland Hangar cafe we toured the buildings on the Spit including an upward view of the ladders inside Calshot Tower. The earlier sunshine had given way to heavy drizzle as we toured the Castle (which had been closed for lunch) before returning to Southampton.

Seatern Diaries > 2018 > Diary Entry > 21st – 24th April: More Weather, Ashlett and Calshot
Because we use Google Maps and other services, using our site may place cookies on your computer. If you continue to use this site we will assume that you are happy with it.Ok