3rd October: Round the Fairway Buoy 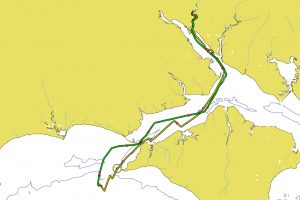 Up before 0300 (!) and left jetty at 0425. The CO alarm had started soon after I started my outboard, “Dai”, which was odd since there was no wind to blow fumes into the cabin. Soon after leaving the jetty I glanced at the outboard well and in the beam from the LED’s in my cap it seemed to be full of fumes. It appeared that exhaust was coming out where the cooling tell tale should have been. I stopped and raised Dai and decided to carefully try to return to the jetty. However when I restarted Dai everything seemed OK. I can only assume that the cooling intake had been blocked, that I’d been seeing steam from the cooling system, and that raising the motor cleared the blockage. I kept Dai at low revs until I’d got under Northam Bridge and raised the mast in the hope that the motor would be cooled down and not have suffered damage. 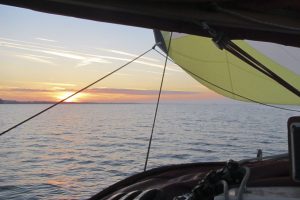 When I reached Southampton Water there seemed to be some wind so I set the main, mizzen and jib, initially even leaving in the single reef set during the previous trip. However the wind died away and I shook out the reef, had some breakfast, and then set the asymmetric which, despite rigging in darkness, set first time! It was more or less a dead run so I was forced to tack down wind doing three or four gybes. Not something I’d have attempted before I had the top-down furler. 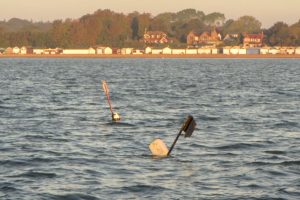 Opposite Calshot I furled the asymmetric in order to harden up to cross the ship channel and cut across the Calshot Spit banks keeping an eye on the echo sounder and with the centreboard down-haul uncleated! Some of the many fishing floats now have flags which is at least some improvement. The houses on the shore in the photo are at “Hill Head”, Calshot – an NCI watchkeeper, now resigned, lives there. 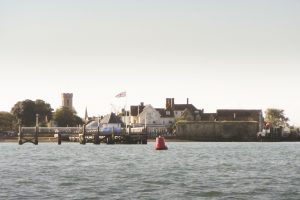 With the ebb tide behind Seatern I was able to hold a single tack until off Newtown River where I tacked out looking for more wind, and hoping to stay in the main current. The wind was falling light and I was worried that I’d miss the tide through Hurst Narrows so at 0925 I started to pump out the ballast tanks. Almost immediately the wind freshened a little! Another small tack was necessary off Lymington but there was now no problem getting through Hurst and, once through, I refilled the ballast tanks and, for a short time, was glad I did. 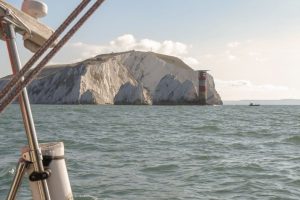 Beating on Starboard tack took Seatern along the Needles Channel and it was interesting to see the various buildings on the headland which, since my visit, I can now recognise. Seatern’s speed over the ground, and new course when I tacked to avoid anglers fishing on a motor cruiser, clearly showed that the tide had now turned. With the wind still decreasing, having passed the Needles at around 1040, it took till noon to reach the Needles Fairway buoy which I rounded dinghy racing fashion! 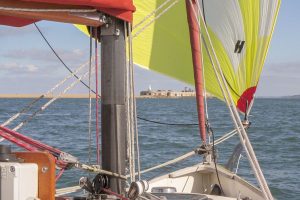 In order to avoid being carried over The Shingles it was necessary to aim for the Highcliffe shoreline while actually heading towards Milford-on-Sea. This was a bit close to the wind to carry the asymmetric so I had some lunch before, at 1245, freeing off and unfurling it.  By 1300 I decided that Seatern could bear away and head for Hurst Point. Soon we were above 6kts and went through Hurst Narrows at over 7kts. Despite the light wind blowing with the current, the water though the Narrows was quite choppy with those odd, vertical, breaking waves. I really don’t understand what causes them. 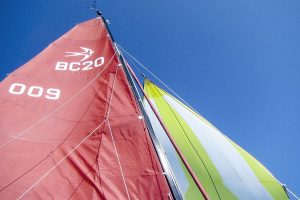 I gybed near Round Tower Point (between Fort Albert and Fort Victoria) and was on a port broad reach/run until off Lymington where I gybed back onto starboard. One problem with the top-down furler is that you can’t ease the tack (they sell another bit of expensive kit to allow that) so I took to easing the halyard to allow the asymmetric to set with the wind fine on the quarter. However, having learnt from a previous trip, I took care to tension the halyard (and hence the torsion cable) before furling for each gybe. With the help of the flood tide, the starboard tack was taking Seatern down the Solent towards Gurnard Ledge and I gybed back onto port to avoid over-standing the course north of the Thorn Channel. 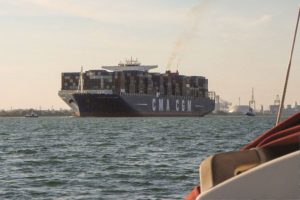 By the time I was approaching the shallows of the Calshot Spit banks the wind appeared to be vearing and what had been a broad reach on port was beginning to be a close reach, almost a beat. At 1515  I furled the asymmetric and set the jib and was able to sail across the ship channel ahead of an outbound Red Funnel ferry. Once across it was going to mean tacking all the way up Southampton Water and I decided to start Dai and furl the sails. That allowed me to stow the asymmetric and start getting Seatern ready for lowering the masts whilst motoring towards Dock Head where I was met by the CMA CGM Jules Verne outward bound. I got the masts down before the Itchen Bridge and was back at the jetty by 1751. [56.5nm] 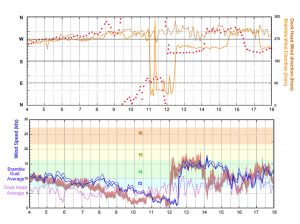 It’s not the first time that I’ve returned to Southampton Water to find a northwest wind blowing directly against me. This time, when I looked at the winds recorded from Bramble Met Post, it didn’t tally with the winds I’d experienced on Seatern. I’ve therefore plotted separately the wind directions and speeds using data from Bramble and Dock Head and copying the screen graphs for Calshot Spit from the Port-Log web site (substituting dots for the direction trace for clarity). There were surprising differences in the winds at the three sites. During the time I sailed out to the Fairway buoy (0430 to 12 noon) the winds speeds at Bramble and Calshot showed a decline from low force 4 to force 1, this was in line with what I’d experienced.  Winds at Dock Head were different staying at force 2 during the whole morning and then increasing to force 3 in the afternoon. The Dock Head directions showed a steady veer from W-by-S to WNW.

Wind directions at Bramble and Calshot showed the same behaviour as at Dock Head until about 0830 (Calshot) and 1100 (Bramble). At these times, as the winds decreased below about 5 kts at each site the directions went round to the east. Then at 1200 at Calshot the wind speeds rapidly increased to high force 4, low force 5 and the wind direction changed to SSW. This change persisted until 1400 when the wind speed dropped to high force 3, low force 4 and the direction changed to WNW. The rapid increase in winds occurred at 1230 at Bramble, half an hour later than at Calshot, and then persisted until about 1515, over an hour later than at Calshot. The changes in wind direction at Bramble were similar to those at Calshot with the timings in step with the speed changes. Thus when Seatern arrived at Calshot the strong SSW winds had already ceased and I was faced with the WNW wind blowing down Southampton Water. This was at a time when out at Bramble the winds were still SSW.I should add that the day was, and had been, very sunny with clear blue skies; all very strange!

Seatern Diaries > 2018 > October: "Summer's over" > 3rd October: Round the Fairway Buoy
Because we use Google Maps and other services, using our site may place cookies on your computer. If you continue to use this site we will assume that you are happy with it.Ok