I took the sails off Seatern today. I was thinking of going out sailing for a last short (one tide) sail but decided against. Indeed I’d refilled the fuel tank in preparation! However I’m still getting over a cold I had last week and a strong, cold northerly is forecast for the coming weekend.

In the event I’m glad I didn’t sail since the wind stayed very fitful all morning. Instead I aired and then refurled the jib and mizzen. The main seemed dry enough. It seems very early in the autumn to give up on sailing but only in 2014 did I get out after the end of September and it seems silly to leave the sails out in the weather in the off chance of the odd sail. The restricted daylight hours coupled with the tidal restrictions at my jetty are a definite disincentive to going sailing. 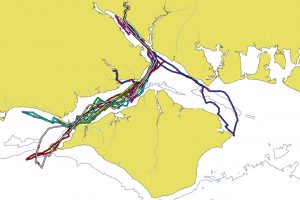 So I first cleaned the floor in the cabin section of my “shed” and then got the sails into it. This year’s total was 385 nautical miles which is more than during either 2017 (290nm) or 2016 (344nm) so at least I stemmed the decline! Mainly it’s determined by the weather. I actually went out as many times in 2017 but the constant south-westerlies meant I never made it past Hurst that year. This year I was limited more by lack of wind causing me to turn back earlier than planned! 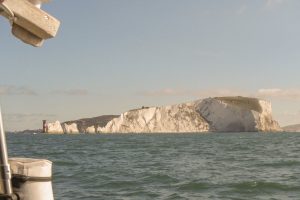 Although we’ve had some warm, sunny days, the nights have been fairly cold recently so I’ve been using an electric fan heater to keep the cabin temperature above 10C to avoid the auxiliary power generator using up fuel. Now the latter is out of the boat, as is the fan heater, and I just have a dehumidifier to keep the cabin dry and aired. I’ve been catching up on my reading of the Marine Quarterly in the boat in the early mornings and, for that, the Pan-2000 heater gives out a more pleasant heat than the electric fan heater.

Seatern Diaries > 2018 > Diary Entry > October 24th: End of Season!
Because we use Google Maps and other services, using our site may place cookies on your computer. If you continue to use this site we will assume that you are happy with it.Ok