For some time I’ve been concerned that “Calm (glassy)” or “Calm (rippled)” has been used in the NCI Calshot hourly weather observations when the actual sea state has been “smooth” or even, on some occasions, “slight”. The terms to be used come from the Douglas Sea State table for wind waves which is published by the WMO as Code Table 3700 where the heights are defined in metres and I have added approximate Imperial values:

WMO 3700 states that the height values are meant to refer to well-developed wind waves of the open sea, and if the waves are judged to be equal to a bounding height, the lower code figure is to be used (e.g. 10cm waves should be coded as “1” Calm (rippled).

Sea state estimation at Calshot is complicated by the frequent wakes from motor vessels which often dominate the wave field. On the other hand the predominantly short fetches result in the sea state rarely exceeding “Slight” although it is possble that “Moderate” may occur in tide race areas with wind against sea.

Arriving for my watch on Sunday 3rd February there was little or no wind and I took some photos of what “Calm (glassy)” and “Calm (rippled)” really look like. 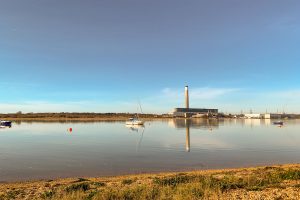 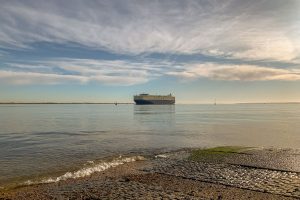 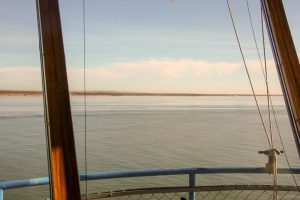 Seatern Diaries > 2019 > Jan-Feb: mild, damp, hot! > 3rd February: Sea State “Calm” at Calshot!
Because we use Google Maps and other services, using our site may place cookies on your computer. If you continue to use this site we will assume that you are happy with it.Ok