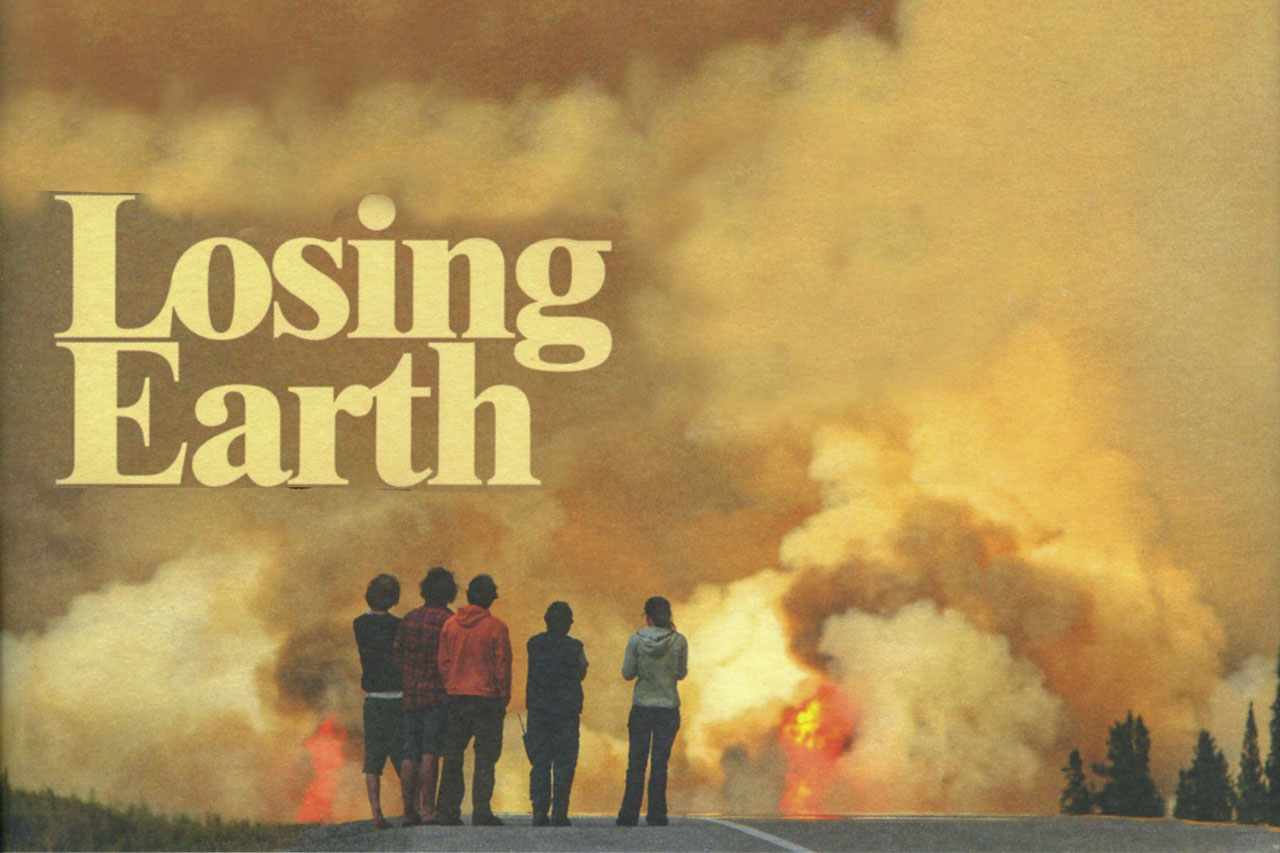 During the afternoon of the last day in April I read a whole book. “Losing Earth” by Nathaniel Rich had been “Book of the Week” on BBC Radio 4. I only accidentally heard a bit of one broadcast, but that was enough for me to listen to the complete set on iPlayer and to order the book. It arrived in the morning and I’d read it by the evening. 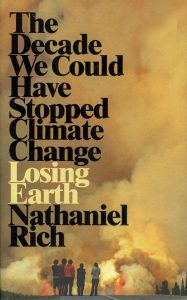 In someways I was only doing what millions of people do on Youtube and Facebook; looking at something which confirmed my own views. I am very pessimistic about humanity’s ability to prevent disastrous climate change, and this book suggests that, fundamentally, we can’t. But there was also fascination in that it related events in a period when I had become a small bit player in the international research effort into climate and climate change. Scientists mentioned in the book were people with whom I’d talked at various committee meetings and conferences.

I’d first become involved in the international planning of climate research when, in 1985, the then chair of the JSC/CCCO TOGA Scientific Steering Group, Adrian Gill,  invited me to a meeting at Scripps Institution of Oceanography. “JSC” was the World Climate Research Programme Joint Scientific Committee for which I often contributed in later years as an invited expert. “CCCO” was the Committee on Climate Change and the Ocean which had had Roger Revelle (who features strongly in the book) as chairman. 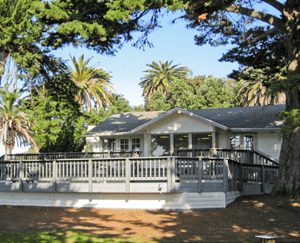 The Martin Johnson House at Scripps

TOGA was an experiment about the role of the Tropical (Pacific) Ocean in the Global Atmosphere. We met in a beautiful bungalow, the Martin Johnson House over looking the Pacific at the Scripps campus in La Jolla, California. It was the only meeting I’ve attended where participants swam through the surf to get to the lunch venue, a snack bar under palm trees near Scripps Pier. They were happy to accept our wet dollar notes, it was clearly not unusual! 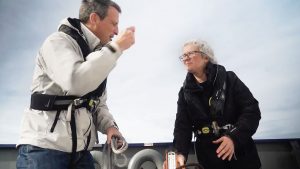 I contributed a substantial study paper on surface flux estimation which was the spark which, in future years, led to my involvement with global ocean observing systems, and to research at the National Oceanography Centre into climatic scale air sea fluxes. That still continues led by Dr Liz Kent who recently appeared on the BBC National News demonstrating the use of buckets to determine sea surface temperature.

So in the 1980’s and through the 1990’s I was involved in international working groups on ocean observations for climate research. Indeed in 1990 I became part of the James Rennell Centre for Ocean Circulation which was set up using climate research funds provided by Margaret Thatcher who had become concerned about climate change. Reading Nathaniel Rich’s book I feel slightly guilty about that involvement. One could view the support for climate research by the various Governments as a way to avoid the drastic action which was so clearly needed. In reality the basic science of the greenhouse effect has long been known. 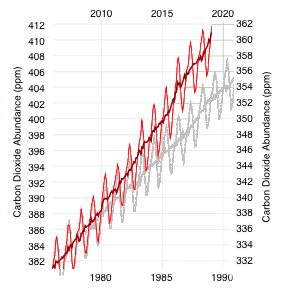 In recent years there have been the various, well publicised, international meetings aimed at stabilising the atmospheric CO2 concentration – the “Conference of the Parties” (COP) to the 1992 UN “Framework Convention on Climate Change”. How are we doing? I’ve created the graph using information on the US NOAA Climate.gov website . It shows the atmospheric concentration of CO2 measured at Mauna Loa in Hawaii plotted against time. There is an annual variability with higher values in northern hemisphere winter, but the annual trend shows a continuing rise. The grey data show the values for the years 1980 to 1990 with values as in the left hand scale. The red data show values from 2010 to 2018 as shown by the righthand scale.

Despite all the concern about climate, the rate at which the atmospheric CO2 concentration is increasing is faster now that it was in the 1980’s. The average CO2 concentration in 2017 was 405 parts per million (ppm). The last time it was that high was over 3 million years ago when air temperature was 2° to 3°C higher than the pre-industrial era, and sea level 15m to 25m higher than it is today.  So the Earth has been here before. But this time the changes have been so fast that much of the Earth system has yet to show the effects.

No doubt the Earth will survive, but will the human species?   …I said I was pessimistic!

Seatern Diaries > 2019 > Diary Entry > 30th April: Losing Earth
Because we use Google Maps and other services, using our site may place cookies on your computer. If you continue to use this site we will assume that you are happy with it.Ok