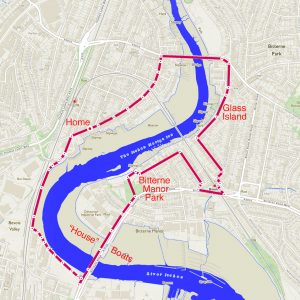 As an alternative to Riverside Park I can skirt the section of the River Itchen where I live. It always seems more natural to progress anticlockwise heading southwest along Priory Road and then taking the boardwalk which runs between “St Denys Beach” and the railway line. Walking back from the Oceanography Centre before the boardwalk was built I would have to cling to the railway fence if the tide was in over the “beach”. 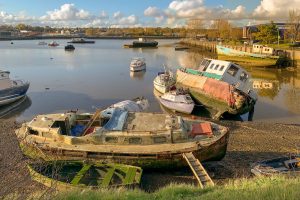 The east side of the river either side of Northam Bridge is designated a “small boat mooring” area and is the site of various boats and rafts of boats in varying states of decay, many of which are lived on as “house-boats”. In the photo the Penzance registered fishing boat against the wharf is the one which for a few years was moored opposite my house. At present the old Hythe Ferry and the hull of the fire damaged “Kahu” are now on that mooring. 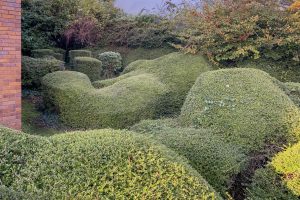 After crossing Northam Bridge there is an industrial estate on the left, upstream side of the road. The OS Map from 1871 shows this area as being a marshy part of the river with a tower on the small “Blackberry Island”. One of the industrial firms on the estate is “He-man Controls” who make dual controls for driving school cars. They have transformed the small area between their metal building and the road with some topiary reminiscent of japan.

Inland was the site of the Clausentum Roman Fort. One fosse remains visible in Bitterne Manor Park which I enter a little further along. The further side of the Fort is now marked by Rampart Road. Presumably the fort was situated on this part of the river because it is the first place where the river can be forded at low tide. Indeed, I have once walked across to the other bank.  The remains of a Roman period quay are visible in the mud on my home (west) side of the river.

Situated directly across the river from my house, Bitterne Manor Park and the grounds of Bitterne Manor House provide a green, wooded river bank area providing relief from the residential riverside developments to either side. All these modern apartment blocks have been built since I moved in in 1996, replacing wharves occupied by industrial sheds and boat building firms.

Bitterne Manor Park viewed from my jetty once it got light following the end of a night time disturbance. Only one car and a small fire, remain.

Having a park across the river from Seatern’s home is not totally without it’s drawbacks. 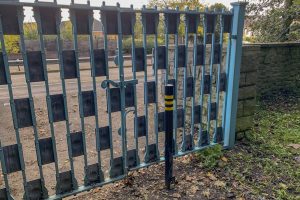 Inside the entrance gate to Bitterne Manor park

One year people were firing fireworks across the river and twice this summer I was woken by music and the sound of cars revving. A couple of souped up cars had been driven right into the park and were providing lighting for a mini rave. I complained to the Council’s help web site and had a very unsatisfactory response. However on my recent walk I noted a new post inside the park gates to stop people driving in.

At present there is a twin bilge yacht on the Bitterne Manor part of the park foreshore. I wouldn’t like to have a boat there, so accessible from the park. Recently it’s been joined by a speedboat with outboard motor. previously the same boat was on a mooring in the river and on one occasion was inspected by ABP. 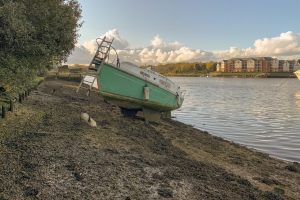 Walking on from the park I pass the Sea Scouts new posh building and less posh boatyards with a preponderance of wrecks and boats in dire need of more care. Then the railway causes a diversion inland before getting to Whitworth Crescent which runs parallel to the river. 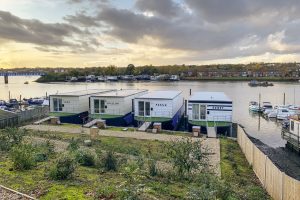 I haven’t been up the river by boat for some time so was surprised to see that “Glass Island”, a small promontory formed out of waste dumped by a long defunct glass works, has now been converted into moorings for four new houseboats.

Whitworth Crescent brings me back to Bitterne Triangle and hence over Cobden Bridge and back along Priory Road.

Seatern Diaries > 2019 > Diary Entry > 3rd December: An Alternative Walk
Because we use Google Maps and other services, using our site may place cookies on your computer. If you continue to use this site we will assume that you are happy with it.Ok