The house adjoining mine is let out so I experience a succession of neighbours. The previous occupant was a young French man who acquired a yacht hull for next to nothing and tied it up at the bottom of his and his neighbour on the other side’s garden. When he first paddled it home, having had a tow up the river, he didn’t even know what sort of keel it had; it turned out to have twin bilge keels. 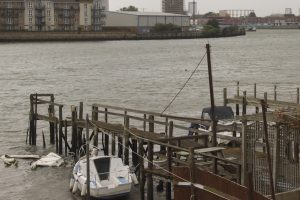 Initially he worked hard, cleaning the hull and painting it below the water line. However then the project stalled. When he moved out, during summer 2019, the hull was moored against the next jetty downstream from mine, the owner having been told that it would soon be moved. Of course it did not get moved. 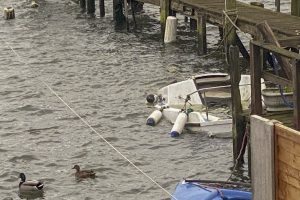 Eventually it became obvious that water was leaking from somewhere in the keel area each time the tide went out. For some reason it had been left with the wave boards removed and I wonder if rain during the very wet autumn had accumulated in the cabin and reached a point where the weight of water, supported on the keels when the tide was out, was too much. 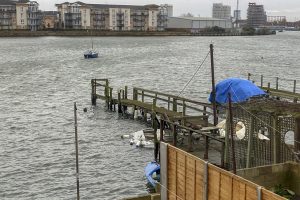 At first it stayed afloat but recently it has tended to sink on each high tide, joining the jetty owners own boat at the outward end of the jetty which also seems to have been abandoned to the river. It is a sad sight! Meanwhile, the outboard motorboat on the next jetty along also sank during the autumn, possibly due to rain water accumulation. It has now been given a blue tarpaulin cover.

My view is covering a boat is a very bad idea unless the cover was designed for the boat, is stretched taught, and is fastened down to attachment points built into the boat for that purpose. Otherwise the cover does not keep out the weather, it just hides the damage being done. Eventually the cover breaks loose, or worse, becomes waterlogged and possibly capsizes the boat.

Seatern Diaries > 2020 > Diary Entry > 13th Jan 2020: Boats demand Attention!
Because we use Google Maps and other services, using our site may place cookies on your computer. If you continue to use this site we will assume that you are happy with it.Ok