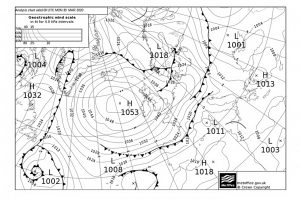 After a winter of rain and mobile westerlies we are now under the influence of another intense anti-cyclone. But unlike the one in January this high is centred more to the west of the UK. The chart is for 00Z on Monday 30th, the previous day the central pressure was 1055mb!

So we have been having a period of sunny days, albeit with a cold easterly wind. But ironically the settled weather has coincided with the UK population being “locked down” and unable to leave their houses except to buy food, go to employment deemed “essential”, for solitary local exercise, or for medical reasons. Pubs, non-food shops, restaurants and cafes, all are closed. 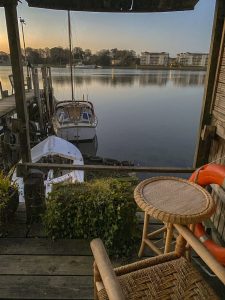 Early morning on the River.

As an “over 70” I’m heeding Government advice and staying at home so I’m so glad to have the jetty to go out to and the river as a view.

Fortunately I had got my Tohatsu outboard, “Dai”, back from the Rib-Shop on Wednesday the 18th (before the “lock-down”) having taken it in for it’s annual service at the start of the previous week. It would have been ready earlier but the impeller casing was cracked and they had to wait for the replacement part. Apparently it’s not an unusual fault. I remounted Dai in Seatern on Sunday (29th) taking advantage of a reasonably high tide and a bit less wind than on previous days.  I checked the tick-over rate since the previous year the throttle stop had been adjusted a bit too high; this time it seemed OK. 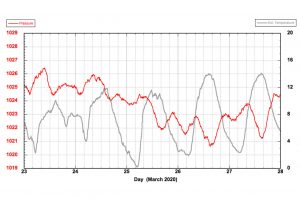 Atmospheric pressure (red) and air temperature as measured by my met station.

The anemometer signal from the mast head on Seatern disappeared sometime around the end of February and I’ve had the display in the cabin acting as a barograph. With the fairly constant air pressure and the fairly large diurnal temperature changes, the atmospheric tide has been very evident.

I don’t know much about atmospheric tides but according to Wikipedia they are mainly caused by solar heating of the atmosphere due to absorption of radiation by water vapour and ozone. One might therefore expect a dominant 24 hour period but the preferred modes of oscillation of the atmosphere are such that, at the surface, the dominant mode is semi-diurnal with peaks in the morning and evening. Other harmonics which are excited include 8hr and 4hr periods. 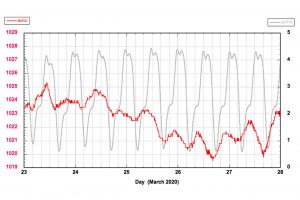 Comparing the fluctuations of air pressure and tide height from Sotonmet over the last few days one might be convinced that peak pressure best correlates with half-tide stand… yet another demonstration that correlation should not be confused with cause and effect! An historical study of the development of atmospheric tides theory shows that it wasn’t until the 1960’s, with the improved knowledge of vertical atmospheric structure from rocket soundings, that a successful explanation was achieved.

Incidentally, the diurnal air temperature fluctuations in the Docks were not as clear as on my met station and there appears to be a bit over 1 mb offset between our pressure readings but the fluctuations are very similar, which is the main thing!

Seatern Diaries > 2020 > Diary Entry > 31st March: Atmospheric Tides
Because we use Google Maps and other services, using our site may place cookies on your computer. If you continue to use this site we will assume that you are happy with it.Ok