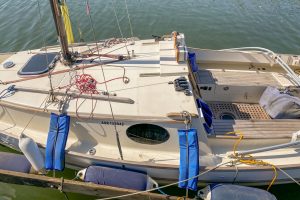 Reversing the fender board turned out to be harder work than I’d anticipated so what with doing the NCI Calshot weekly news bulletin (which takes far longer now there is no news!), a supermarket delivery and so on, it was Wednesday 22nd April before I plucked up courage to tackle the spray hood. This was last cleaned back in February 2018 and given the very wet winter it was looking both dirty and green in places.

To get the spray hood off means undoing all the halyards and other lines which run through it. In the process I discovered that the track which attaches the spray hood to the cabin top was loose so I removed that and replaced it with longer screws and generous amounts of marine sealant!

Initially I started cleaning the canvas with diluted Starbrite canvas cleaner and a scrubbing brush but that makes so much foam that one can’t see if you have cleaned that section or whether it is still dirty. I swapped to using water with a small amount of “essential Waitrose all pupose cleaner” added. That allowed me to see what I was doing and for both products, I suspect the main cleaning is done by the scrubbing brush! 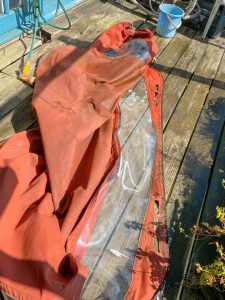 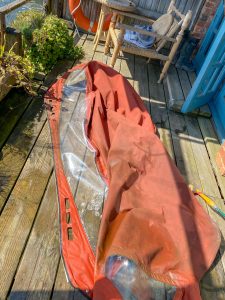 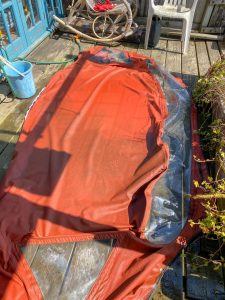 I cleaned the whole of the outside on the 22nd and on the 23rd did the inside plus some bits on the outside that I’d missed. The outside still could do with some more work but I was beginning to think I might be developing “housemaids knee” so I’ve stopped for now.* 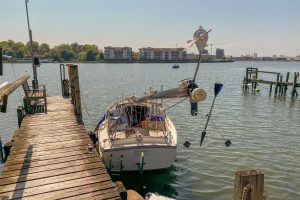 With the spray hood off I thought it a good opportunity to lower the mast and check the anemometer which has stopped sending readings. Of course once the mast was lowered it started working again, and neither tugging and pulling the cable at the mast top nor the base would stop it! It was also an opportunity to replace the “bird scarer” broom bristles which I installed last July to try and stop the crows perching on the Windex or the anemometer vane. Recently there has been more bird droppings on the cabin top and, although I haven’t seen the crows up there, I have my suspicions particularly since there were only two bristles left on the Windex!

The anemometer was still working once I’d raised the mast but by the next morning it had stopped. Nothing like having an intermittent fault!

* Note added 5th May: On the 28th April I used Starbrite Canvas Cleaner to give both outside and inside of the spar hood a final clean and then gave the canvas a thorough rinse with fresh water. The weather has become more changeable so I’m waiting for a dry period to reproof the outside with Renovo Marine Ultra Proofer.

Seatern Diaries > 2020 > About Seatern > 22nd April: Spray Hood and Mast Top
Because we use Google Maps and other services, using our site may place cookies on your computer. If you continue to use this site we will assume that you are happy with it.Ok