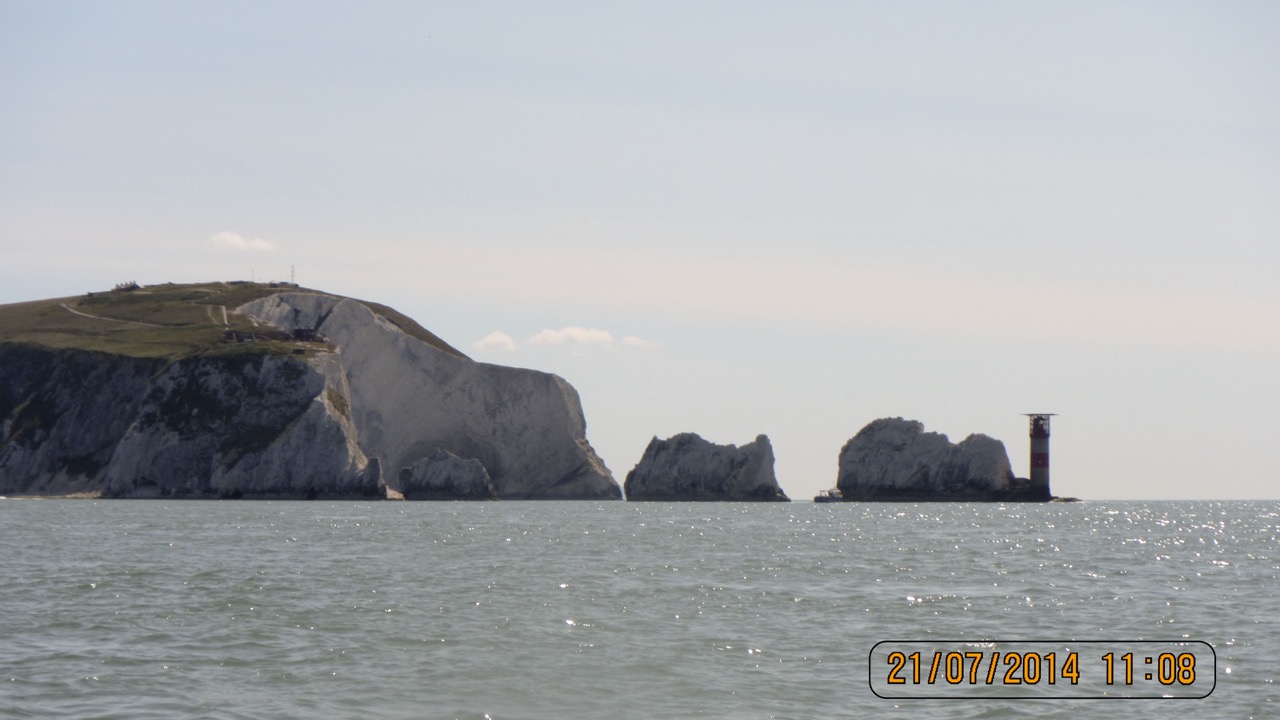 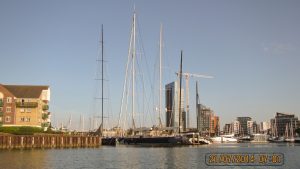 0628 left jetty, could have got away about 3/4 hr sooner. 0700 passing Ocean Village marina; there’s a yacht in there which makes Leopard look small, “Christopher” registered George Town. A ketch just like Seatern, only bigger! 0714 off Weston: Not much wind and thought about using asymmetric but since increase likely decided to pump out tanks and use normal sails. Wind freshened by the time I’d hoisted sail and had run/broad reach down Soton Water for a change.

0910 off Lepe Spit and reaching down Solent at around 6 kts (current with me!). By 1019 I was playing “dodge the ferries”… one is easy but if you are in the middle of the Solent they come in pairs from both directions! I had thought of looking at Keyhaven Harbour but didn’t want to go in on a falling tide so decided to go on through Hurst Narrows and get past the Needles this time. 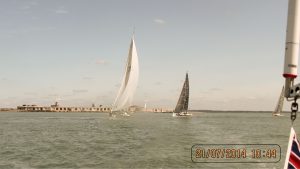 At Hurst the yacht race I’d seen off Cowes caught up with me. They were going faster but not by that much, which was pleasing. At first I was to windward but I managed to use a gap in the fleet to get to leeward since I didn’t want to be forced towards the Shingles. At around 1100 two swedish yachts motor sailed past taking photos of me as I took photos of them. By 1120 I was at the SW Shingles buoy and the wind was dropping; by 1145 I was west of the Shingles and almost becalmed. Decided to have lunch (Cornish pasty).

1220 not wanting to be carried onto the Shingles when the tide turned I rigged the asymmetric. However the wind then started to increase having veered more northerly (forecast was correct!). Sailed in towards Milford-on Sea with the idea of returning via the North Channel once the flood had started. There were one or two squalls which prompted me to fill the ballast tanks in case the weather worsened. Approaching Hurst Narrows there was little wind but the flag on the Castle was suggesting a strong breeze. The Spit must create a lot of sheltering. Just as I was photographing the current rips in the Narrows, the wind hit me and I had to spill wind to prevent Seatern from broaching. Suddenly we were doing 6 to 7 kts. From Hurst it was a close reach/beat back and I stuck to the north side of the Solent to keep to windward. 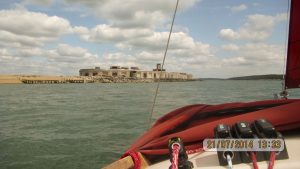 1550 reached across the shipping channel and then started the beat up Southampton Water. Despite being on the flood the current was against me (estuarine circulation?) and the wind was increasing. I twice missed tacks when the jib sheets caught on the shackles for the lower shrouds which I need to change. A large, and clearly empty Dutch dredger was wanting to work in the channel somewhat to the consternation of VTS since HMS Ocean and the QM2 were soon to be outward bound. 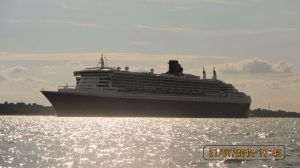 By Hamble Oil jetty I’d had enough and once past it hove to in order to get the sails down and motor. I was worried I might drift back onto the jetty and the outboard sensed that and would not start. Just as I was preparing to sail out under jib and mizzen I got it going – I think I flooded it by using the choke in warm weather. Despite the wind I’ve been sailing in tee-shirt and shorts! The QM2 was a fine sight in the evening sun. Back at the jetty just before 1900.