Well, only 344 miles covered this year – the decline continues. More and more I realise how spoilt I was for weather in 2014. This year I didn’t manage to get past Hurst – the map illustrates the story with the western Solent full of tacking as Seatern beat into the prevailing SW wind. 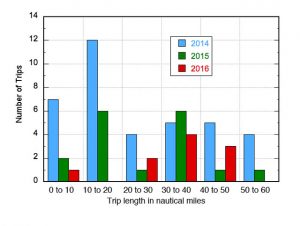 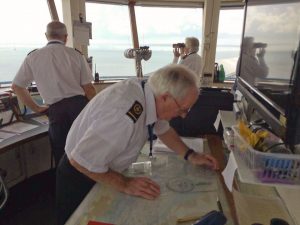 The other “distraction” from sailing during 2016 has been being a National Coastwatch watchkeeper at Calshot. I qualified at the start of February and eventually fell into a routine of doing the middle watch on a Sunday – that is 12 to 16 in summer and 11 to 14 in winter. I settled on that watch because there often seemed to be a vacancy and yet, being a weekend, there was more likely to be something happening. Also, at least in summer, Sunday is a day I’m less likely to want to take Seatern out simply because there are so many other boats. While there is no reason that the NCI work should decrease my sailing hours, it has meant that I’ve not always been looking ahead to anticipate every sailing opportunity as I might otherwise have done.

By March Seatern was looking decidedly green in places. I cleaned the spray hood and used Boracol on the teak. The Boracol has been a great success and kept the wood work looking good right through the year. I got a couple of sails in during April but the weather was generally cold and uninviting. Then when it improved in May I couldn’t sail because I’d had some minor surgery on my ear! I used the time on shore to convert much of the Model Boat Club web site to WordPress. I was pleased with the result and eventually plan to convert “Seatern Diaries”. I was back sailing by the end of the month but the weather then, and through June, could hardly be described as settled summer weather.

At the end of June I went to the Swallow Yachts Raid in Cornwall. I stumbled on a really good hotel overlooking Falmouth Harbour and manned one of the rescue boats which was driven by Matt Newland. It was windy and sometimes rainy but an enjoyable few days. However I was glad I had not taken Seatern – I wouldn’t of fancied being part of the fleet! 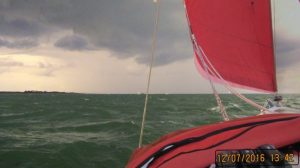 I managed four trips of around 40nm each during July and the start of August but never managed to get past Hurst Narrows. Then in August, days when the tide was right did not seem to coincide with any decent sailing weather. Perhaps my windiest sail in Seatern came near the start of September when I only managed to get as far as Lepe. On the 23rd September, a trip to the Bald Head area followed by a motor past the boat show turned out to be the last sail of the season. The winds that day somehow summed up the season. Having earlier been becalmed, and having anchored near Bald Head, Seatern was on a pleasant reach back down Southampton Water with asymmetric set when the wind shifted 90 degrees or more. Back under jib, we were hit by a huge gust causing Seatern to broach into the wind. 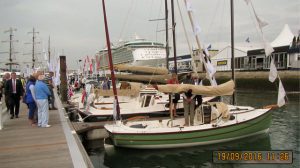 I visited the Boat Show on three days including one when I was on the NCI stand. Using a “Boat Show discount” I ordered the bits to extend my pontoon by a section. The idea is to make it less likely that Seatern blows around the end of the pontoon when I return from a trip and have her attached by a bow rope only prior to swinging her around to face back out into the river. However it also means I can stow my Canadian canoe “SeaOsprey” on the pontoon which means it’s much easier to launch. Having extended the pontoon early in October I got in five river trips in SeaOsprey during the remains of the year. This year I took the sails of Seatern in November in anticipation of winter storms but so far (early January 2017) it’s been a calm winter.