During the 2014 Seatern covered about 755 nautical miles, almost entirely in day trips from my jetty on the River Itchen in Southampton. 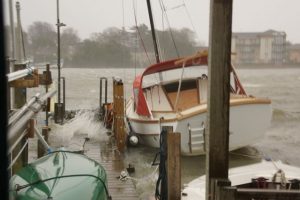 Seatern arrived in Southampton on the 19th December 2013 at the start of the continual series of storms that extended until well into February 2014. It took me until March to finish fitting out and have my first tentative voyages. After that I spent the year gaining experience. Being used to sailing racing dinghies, I had much to learn!

Tacking against the current

As a teenager I had learnt to sail in North Wales where tides reach 10m and currents in the Menai Straits reach 7kts. So I must admit that I initially under-estimated the importance of the current direction given the weaker tides in the Solent. In a racing dinghy, which points very high and can maintain speed when you tack, short tacking in shallow water will take you up wind against a current. On a beat, Seatern is as fast or faster than a racing dinghy (afterall she is longer) but I don’t manage to get her pointing as high and she is so much slower going about. Very short tacking does not pay so one ends up fighting the main current. I soon learnt that beating against the tide in the Solent was not a sensible choice! 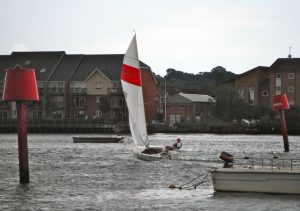 The other big difference is being limited by hull speed. Possibly Seatern might plane if sailed with ballast tanks empty and without all the heavy stuff I make her carry – 6hp outboard, petrol tank, mooring ropes, radio gear and so on. Certainly I have had her surfing down waves when sailing downwind with the asymmetric set. However she is generally limited to her hull speed of around 6 to 6.5 kts. I’m impressed how easily she gets up to that sort of speed with an increasing wind, however once reached, it’s definitely time to start taking in reefs to keep her sailing at her best. I never reef my Seafly racing dinghy (although sailing her single handed I do sometimes use a smaller rig). Given a good wind the Seafly can plane away at 10 kts or more! 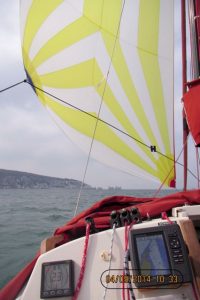 Other new experiences during the year included using the asymmetric spinnaker, and simple things like mooring to buoys, handling under outboard etc. Not to forget raising and lowering the mast which I now do routinely while underway. By the time I had gained experience and was thinking about doing more over-night trips it was mid summer and potential anchorages looked like marinas. However I was more than happy doing day trips. On a “single tide” trip the limit was about 15 nm, say to the Hamble Spit and back. Going out on the morning tide and coming back in the evening (“two tide” trip) allowed about 50 to 55nm to be covered. And I’ve spent many a night aboard Seatern, but almost always at my jetty!