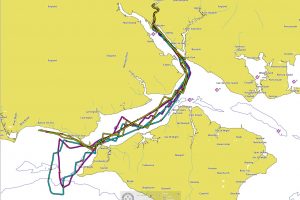 2019 turned out to be a bad year for sailing Seatern! I’m embarrassed to say I only managed three trips. Two of about 55 nm and one of 58nm… but that was it! What went wrong?

March was windy and unsettled but there was some good weather in April. However from mid-February to mid-April I was occupied with finally* having the living room redecorated and new flooring installed. It seems a long time to do a room, but it is a big room and I did a lot of sorting out including re-wiring my AV equipment, pruning my video collection, putting new shutters and blinds on the windows, varnishing shelves, and so on. It was time consuming work but I’m pleased with the result. 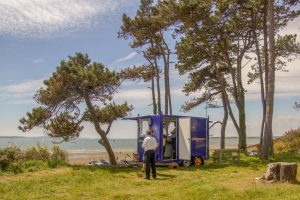 So I didn’t get out on the water till mid May with a sail down the western Solent and around the Shingles Bank… and the Tiller Pilot stopped working! Sailing single handed I use the Tiller Pilot a lot. It steers Seatern when I am getting the masts up and down to go under Northam Bridge. And lots of other times when I want to do something other than steer –  putting in a reef, taking photos, making a hot drink, or just being lazy. I do have a “tiller tamer” but don’t find it possible to use it to “lash the tiller” and keep Seatern on course. Just moving around the boat alters her balance, plus winds in the Solent are rarely constant! 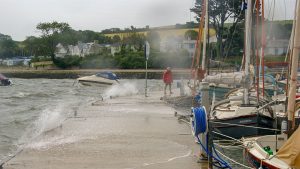 The Tiller Pilot was repaired by the start of June but the weather was back to winter! I was involved in setting up the new off-shoot of NCI Calshot Tower in Lepe Country Park… NCI Stone Point. At the end of the month I was in Falmouth for the Swallow Yachts Raid. By now the weather was hot but easterly gales meant they only got only a single day’s sailing! 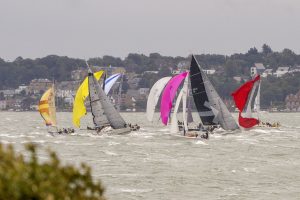 In July I managed a couple of trips; one out to the Needles Fairway buoy and one to Highcliffe via the North Channel. But then August started windy. Many races were cancelled during Cowes Week (10th to 17th August). We opened NCI Stone Point during the week and I was there each day. On some days you couldn’t even see the Isle of Wight, but on other days there were spectacular views of the racing.

Over the last year or two my mode of sailing has been to do long day sails starting and ending at home. Given that my jetty dries, that restricts me to neap tide periods. When I looked at my calendar for September I could hardly believe it. For each of the neap periods I had some other commitment which I could not avoid. As it turned out, it hardly mattered since from September well into the start of winter it rained almost every day. Of course, rain does not stop one sailing, but wet, grey weather does not make it enjoyable and I sail for enjoyment! 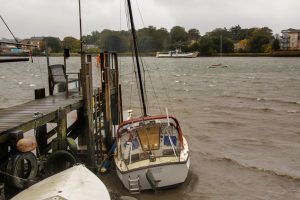 With gales and a storm surge forecast for the start of November I took the sails off Seatern at the end of October. She sits better at the jetty without the weight and wingage of the boom and sail pack. As it turned out, the rest of the year remained unsettled with rain and winds on many days. Indeed, it was January 2020 before an anticyclone became established as opposed to transient high pressure ridges.  And what an anticyclone – 1049 mb in Southampton – but that’s another year!

*having lived in the house more than 20 years!