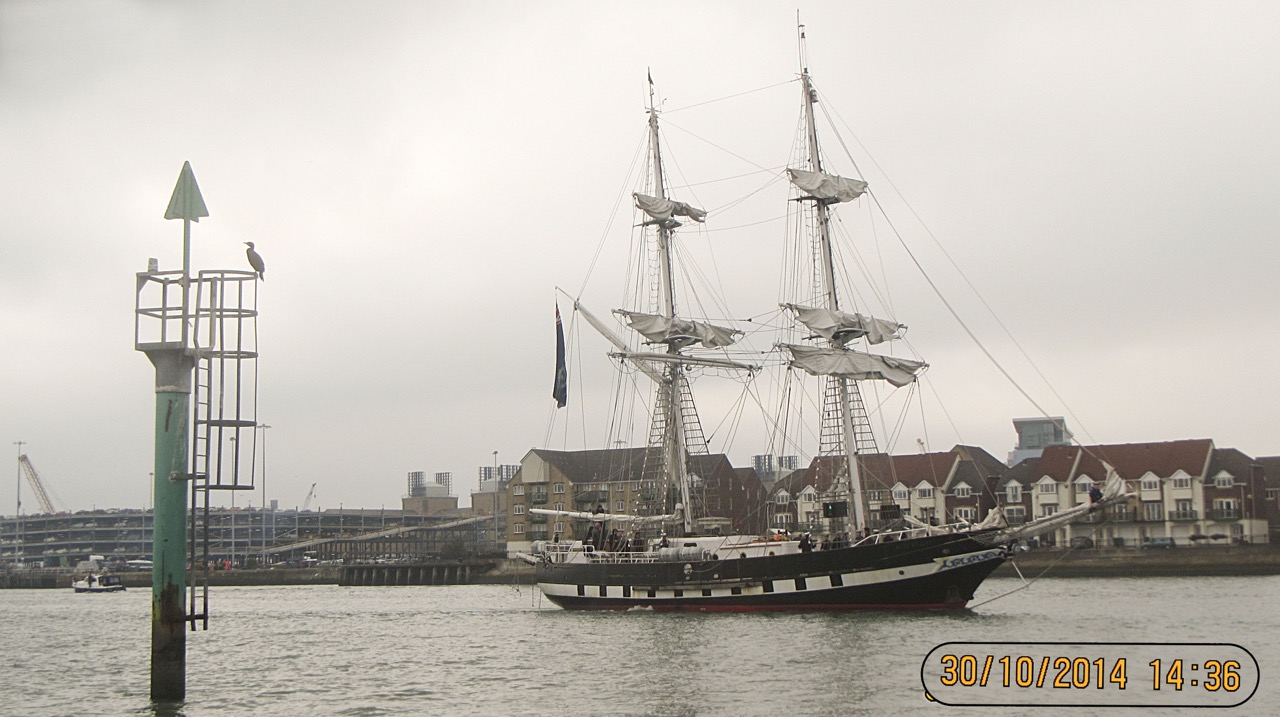 My aim was to have a look in Newtown Creek if there was enough wind to get there. Left jetty in dark at 0550 and once mast was up made quick progress down river on falling tide. 0634 hoisted sail at Weston shelf although little wind. Began to empty tanks and get breakfast but found that the milk was frozen! I put it in the port cockpit rain water sump to defreeze. 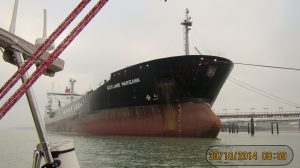 0720 wind increased a little; tanks nearly empty but ballast pump won’t switch on. Found milk leaking out of hole in bottom of bottle. Found tiller pilot not working, rest of electrics seem OK! Decided to refill tanks in order to have breakfast safely without use of Tiller Pilot – back to opening self bailer and a wet sleeve once they are full! However approaching Hamble Oil Terminal was starting to be headed so would have to start tacking – breakfast postponed! 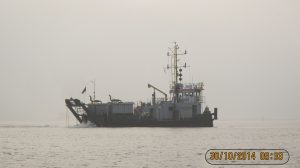 A tanker, Baltic Wave, was leaving the Esso jetty so decided to stay on the east side; however not much room between the Spit and the “Norma” dredger. Wind decreasing, yachts coming out of the Hamble were motor-sailing. With the tide now turning I stayed over the mud in 1 to 2m water with the board up a bit. Even so Seatern was making very slow progress and at 0928 I dropped anchor in 0.9m. I let Seatern drift backwards in the current laying out the chain as she did so I was probably anchored by the weight of chain as much as the anchor! 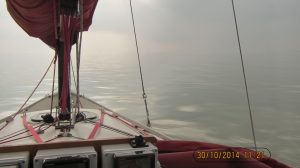 By 1030 I had had breakfast and repaired the electrics. From the days when Seatern had two batteries, the “occasional” large current devices were on supply (then battery) “2” and the rest of the electronics on supply “1”, each supply being separately fused at the battery as well as each device being fused on the switch board. Supply 2 was protected by a 15A fuse which was clearly inadequate for having the tiller pilot and new ballast pump going at the same time. I replaced it with a 20A fuse which should be OK – it’s protecting 30A wires between the battery and the switch board so I could increase it further. 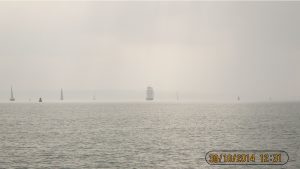 By about 1140 I had all the sails furled and the outboard ticking over. Having gone forward to weigh anchor I noticed ripples on the water approaching from the south. I therefore stopped the motor, started emptying the ballast tanks, rigged the asymmetric ready to set, and set the main and mizzen. Raising the anchor I realised I’d got the bowsprit the wrong side of the anchor rode – something to watch in future. The sail training ship “Royalist” was approaching out of the mist giving an atmospheric feeling to proceedings! 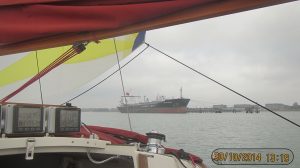 I started sailing at 1150 and, on a broad to close reach, Seatern soon was up at 4 knots and eventually 5 to 6 knots over the ground. With the tanks still empty I was letting the tiller pilot steer while I held the main and spinnaker sheets in either hand. That way I’m ready to let them out should Seatern start being over powered. Normally letting out the main so it is backwinded by the spinnaker serves to keep her on an even keel and prevent her broaching. However in a big gust I want to be able to stop the asymmetric capsizing her! 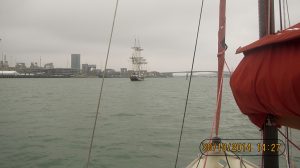 Off Weston Shore I dropped the asymmetric (which went well, wearing sailing gloves helps a lot) and then the main and mizzen. TS Royalist was circling over near Hythe, having trouble furling her mizzen. As a result she reached Dock Head only a little before me and I overtook her when she stopped to send a shore party off in her rib. I watched her into Ocean Village, then motored back up the Itchen slowing down off Shamrock to avoid getting back too early on the tide. At the jetty by 1415. (17nm)