18th July: To the Needles

The mention of both force 7 and fog in the forecast did not seem that promising! However it’s ages since I’ve been out and an easterly wind seemed too good to miss. If I had to come back from the western Solent in strong winds under jib and mizzen, it would be with the current so should be OK. I hoped to leave at 0500 but didn’t get away till 0525 – it seems to take me longer to leave if I haven’t been out for a bit. 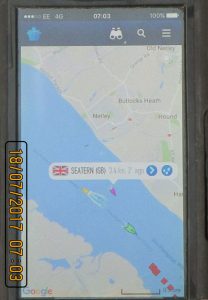 Despite the early hour there was a bit of wind coming down the Itchen and, mindful of the forecast, I checked the winds at Bramble Bank and found they were already 15kts. I had breakfast while still motoring and at 0655 off Netley, hoisted sail with two reefs plus jib and mizzen for the close reach down Southampton Water. Remembering I hadn’t checked my AIS since I put the aerial back together on the last trip I looked at the Marine Traffic web site and found Seatern there! Any increase in the wind was proving fitful at best and, with a large container ship outbound, I used the outboard (“Dai”) to motor sail across the shipping channel. 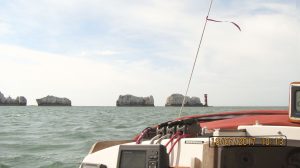 It would be a broad reach down the Solent and at Bourne Gap I decided to shake out the reefs and continue under full sail. With the help of the ebb tide Seatern was making 7 to 8 knots and past Hurst at 0944, well before the turn of the tide at around midday. Last year I never once made Hurst before the tide changed! Aware that I’d need to reef for the return, and planning to sail close to the Needles, at around 1000 I furled the main off Alum Bay. By 1020 Seatern was approaching the Needles but the wind now seemed to be strengthening significantly. 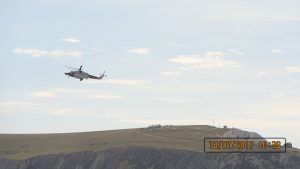 If this was the start of a force 7 I didn’t like the idea of going back through Hurst Narrows with wind against tide. I decided to start back early but with the tide still ebbing on Starboard tack we simply sailed towards the Shingles Elbow buoy.
The port tack was across the current and Seatern was actually being swept back in a SSW direction. This was not helped by a larger yacht running on starboard which caused me to bear away to pass ahead. As I did so it altered course towards me. I bore away more to gain speed and again it altered course. In the end I was forced to tack. It turned out to be the Ellen MacArthur Cancer Trust yacht – a worth while charity but I was not too pleased at how it was being sailed! I decided to furl the sails and start motoring back. A Coast Guard helicopter went over to join an RNLI lifeboat on exercise. 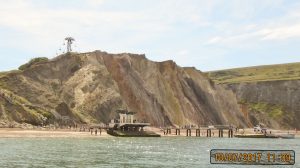 Out in the Needles Channel Seatern was making less than 2 kts with Dai working moderately hard. However the “Solent and Island Tidal Streams” book (Peter Bruce, 2013) confirmed my suspicion that there would be a back eddy along the coast. I motored into Alum Bay where a larger yacht was anchored. It was tempting to anchor, or even run up onto the sandy beach, and to wait for the tide to turn; however I was still worried about wind against tide at Hurst. I therefore continued to motor slowly parallel to the Alum Bay beach looking at the scenery and observing the bottom which was either light coloured sand or dark, weed covered rocks. 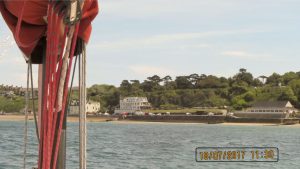 Continuing to motor around Hatherwood Point and along the southwest edge of Totland Bay there were patches of weed extending to the surface in depths of around 2.3m. There was also a group of rocks not shown on the charts (although I’ve later found that they are shown on the OS maps!). In Totland Bay the favourable current was very marked and Seatern was making 4kts or so with Dai throttled back. I skirted around the top of Totland Bay, the Warden Ledge, and through Colwell Bay by watching for rocks and weed and keeping an eye on the depth. I was conscious that if Dai got fouled and stopped I would have to break out the jib very quickly to prevent Seatern being blown back onto leeward rocks. 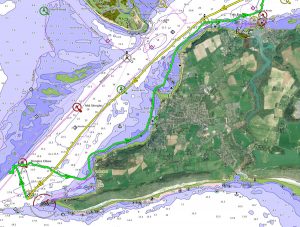 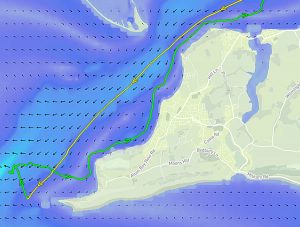 The charts show how I threaded through the various charted rocks and the currents for a similar tidal situation taken from the TideTech tidemap application. It suggests that in Colwell Bay I should have been further inshore, however rocks and weeds kept me further out.

Using this inshore route, Seatern avoided a line of breakers at Hurst Narrows. Once past the Yarmouth Harbour entrance I tried sailing with jib alone but Seatern would not point. I motor-sailed for 20 minutes or so but the wind seemed OK to set the mizzen and stop Dai. 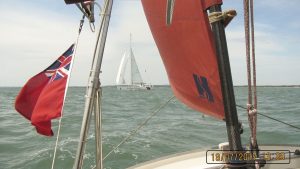 Indeed by 1305 the wind seemed to be decreasing. I was off Sowley and there was no phone connection so I radioed Calshot NCI who confirmed that the wind at Calshot Spit had decreased to 10 kts – even less than the Bramble winds shown in the plot.

I kept wondering about setting the main but tacking towards the Island there seemed more wind. With the help of the building flood Seatern was doing 3 to 4 kts under jib and mizzen and was on schedule for the tide back at the jetty so there seemed little point in speeding up. 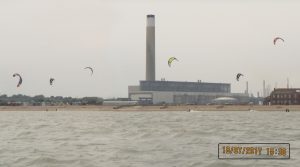 At Calshot there was a host of kite surfers. The wind was now veering and, sailing more free, Seatern was making a solid 4 kts. However once off Netley the wind started to die and the air temperature to increase. The clouds looked ominous and the weather radar showed heavy rain to the southwest which was forecast to reach us between 6 and 7pm. I started Dai and furled the sails and got back to the jetty at 1736. Seatern was all secure before 1900 when the rain storm hit with lightning, violent southwesterly squalls and nearly an inch of rain in a very short period. Over night there was a further spectacular lightning storm. 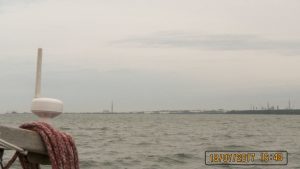 In retrospect, apart from the broad reach westwards in the Solent, for much of the day Seatern was under-canvassed. The early morning wind strength measured at Calshot and the mention of force 7 in the forecast caused me to be too cautious. The winds near the Needles were certainly stronger than anything measured at the Bramble Met Station but presumably they were caused by the headland rather than by the threatening storm.

Seatern Diaries > 2017 > July: "Still unsettled" > 18th July: To the Needles
Because we use Google Maps and other services, using our site may place cookies on your computer. If you continue to use this site we will assume that you are happy with it.Ok