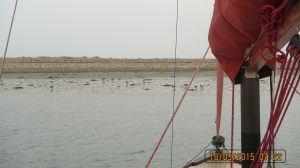 Got up at 0430 with Seatern not aground but near the shore where geese were grazing. Decided to motor out against incoming tide over bar (which looked like being order 1 kt or so) in order to pick up favourable tide outside. Dai started on the third pull and we left the anchorage at 0700 approx.

On the way out a beautiful wooden gaffer was just leaving the East Head anchorage and waves were breaking over the partially exposed Winner Bank. As anticipated it proved no problem motoring against the current. 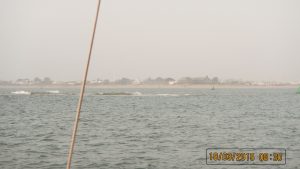 I turned west at the Bar and, once over the West Pole bank, motored into the wind to raise sail at 0820. A beautiful sunny day and a broad reach towards the Horse Sand Barrier Gap. I thought about using the spinnaker but was making good time without it and the wind was likely to freshen as the morning went on. 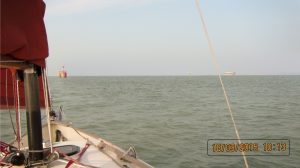 Reached the dolphin passage through the barrier at 0920 and was at Gilkicker by 0950. The change of course brought Seatern onto a beat along the Browndown and Lee-on-Solent shore.

By 1150 I was off the Hook Shore and decided to head in to anchor off Lower Brownwich Farm for lunch and decide what to do with the afternoon. One or two other nearby yachts included one from the Ellen Macarthur Cancer Trust. 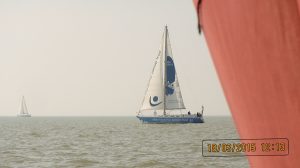 During lunch I absent mindedly put the hot kettle down on some non-slip matting so then spent some time scraping the plastic off the bottom of the kettle using my fingernails!

Woolston was only 6nm away, it would be light until about 1800, but it would be 2000 before there would be enough water at the jetty. The problem was that, after my experiences on the last two days, I didn’t fully trust Dai to start! I decided to stay at anchor for a little while and then start Dai and motor slowly down Southampton Water. If Dai didn’t start I was close to Warsash where SeaStart are based so should be able to get them to help and still have time to get back on the evening tide. 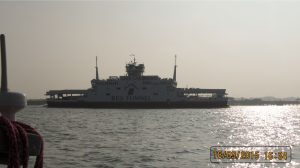 Of course, Dai started OK so by 1430 I was underway, motoring slowly towards Southampton. I was obviously not concentrating since, when a Red Jet passed to the east of me, I realised I had wandered into the shipping channel and had Red Eagle out of Cowes bearing down on me – had to do a quick divert to the Netley Shore.

Going up the Itchen there was the usual problem of rowers, in this case an eight of possibly boy scouts, starting and stopping in the channel while I’m busy getting the mast down. I was off Priory Road by 1800 and tried to pick up one of the empty moorings but there was not quite enough water so I anchored by the railway board walk. As soon as I anchored there was a big splash by the boat and I suspected a fish jumping… but it was some youths throwing stones at Seatern – welcome back to Southampton!

Seatern Diaries > 2015 > March-April: "First Sail!" > 18th March: from Chichester Harbour
Because we use Google Maps and other services, using our site may place cookies on your computer. If you continue to use this site we will assume that you are happy with it.Ok