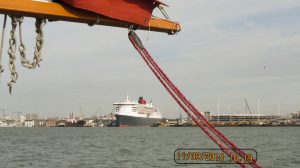 I was planning to visit the Boat Show as I usually do on this the first day (Friday). However a combination of retiming of my new boiler installation in the house, and the weather looking about to become unsettled (again), made me think it would be good to use the day for sailing and “visit” the show by water. I checked the Notice to Mariners for the show which said try to stay 50m away and keep below the 6kt docks limit except in a special speedboat demonstration area in the Marchwood Channel. 50m off the Boat Show marina puts one in the shipping channel, however the VTS web site showed no large ship movements in the period I’d be there; the QM2 having docked earlier that morning. 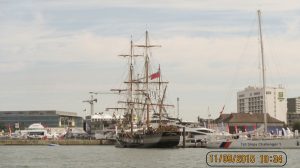 I left as soon as Seatern was afloat but was worried by the increasing amount of high cloud and the freshening wind, suggesting the poor weather might arrive earlier than forecast. Given the SE wind direction I decided to hoist sail off Ocean Village before leaving the shelter of the Itchen. I also left in a reef which remained after the Medina trip. On a close reach off Dock Head there were some brisk gusts so I put in a second reef rather than find myself over-canvassed in the midst of traffic near the boat show. In the event this was over cautious since having run down past the show and on to western docks, I motored back. However two reefs made the handful of gybes during the run very easy! 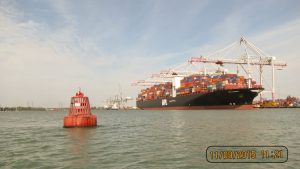 Having sailed past the Boat Show marina I was faced with tacking back against the current – normally on a single tide sail with a SE wind I’d of headed towards Hamble, rather than turning right towards the Test. I didn’t fancy short tacking amidst the ferry and show traffic so decided to continue sailing past the western docks and then to motor back in order to still have enough tide back at the jetty. Having reached the Container Port swinging ground I dropped sail and started Dai to motor back. 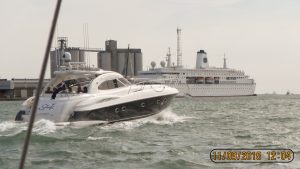 Passing the Boat Show just before noon, the boating experience yachts were reaching back and forth and when a Sunseeker passed a couple of passengers waved to me – that doesn’t usually happen! I suspect they were on board for the experience! Dodging the yachts and ferries meant I was generally motoring faster than I normally do despite the fairly strong head wind and confused chop from the wind and wakes. At time like this having a 6hp outboard is reassuring, there is plenty of power in reserve.

Having rounded Dock Head it was still windy going up the River Itchen. In fact the Dock Head anemometer was 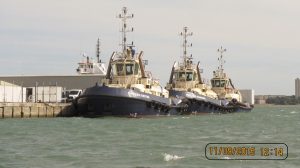 recording around force 6 at this time. The direction was blowing me onto but slightly downstream (i.e. away from) Seatern’s spot on the jetty. 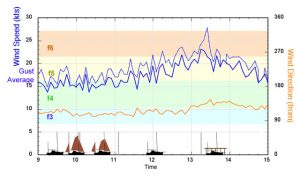 I missed the first time and reversed out and, having failed to line up in reverse, transferred the mooring warp to the port side and brought Seatern into the upstream side of the pontoon, then allowing her to blow around the pontoon and into position at the jetty.

Seatern Diaries > 2015 > Sailing Log > 11th Sept: Seatern visits the Boat Show
Because we use Google Maps and other services, using our site may place cookies on your computer. If you continue to use this site we will assume that you are happy with it.Ok