Left at 0605 on what seemed a particularly dark morning. The tide was ebbing strongly so went down river at 4 knots plus even with Dai throttled back. A very light NE breeze so at 0650 raised sails on Weston Shelf for a broad reach down Southampton Water. 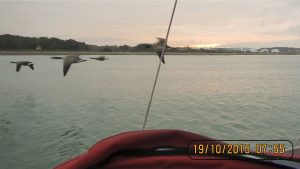 By 0725 I’d had breakfast and started emptying the ballast tanks. I’d though about setting the asymmetric but the low clouds were scudding along so I expected the wind to strengthen with the dawn and didn’t want to be caught out. At 0755, soon after the tanks were “empty” skeins of geese came across the water leaving the western shore marshes for their daytime grazing grounds on the eastern side. Some flew close over Seatern. 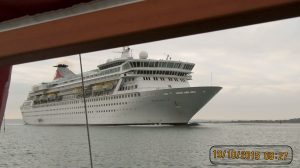 Around 0825 I was close to the eastern side of the shipping lane and a dredgings barge and Red Jet passed each other in shore of me between the large and small greens. Probably they were avoiding the cruise ship Balmoral which came close past Seatern. I did a radio check with Calshot NCI and skirted around the edge of Calshot Spit. Knowing the tide would already have turned against me I decided to skirt along the mainland shore of the western Solent where there is supposed to be a back eddy at least as far as Stansore point. 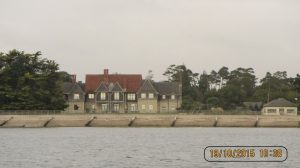 The wind had picked up and Seatern was able to broad reach/run making 3 to 4 knots (GPS) against the tide. Indeed, reaching the Beaulieu River entrance at around 0950, I refilled the ballast tanks as a precaution. I continued close to the shore watching the echo sounder and looking out for the almost invisible fishing floats. This gave a good view of the large, and clearly very expensive, houses along the coast. 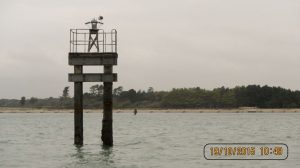 Reaching Sowley Boom at around 1050 it was tempting to cut between the last visible posts and the boom end marker. However the “Solent hazards” book says there are still bits of this derelict wartime structure sticking out of the sea bed, so I played safe and sailed outside. I’d been here before on 24th June but then didn’t know what the structure was. 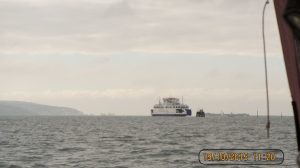 Having sailed past the Pylewell salt marshes, by 1130 I was near to the Lymington approach channel and decided to turn for home. I wasn’t sure whether to sail more free and pick up the current in the mid Solent, or stay higher on the wind. In the end I stayed close hauled on port tack with the mizzen furled and Seatern doing around 6 kts over the ground.

After 25 minutes I put in a reef and some 45 minutes later, a second reef while tacking to avoid a fishing boat. This second reef was probably not necessary, however the wind over tide was creating a fair bit of chop which made it seem windier. I was finding it hard to get Seatern to sail well, one yacht just sailed straight past me which doesn’t usually happen! I did some short tacks to keep out of the precautionary area while a car carrier came out, then sailed across towards the Bramble Bank. At one point Seatern seemed to stall and I had to ease off and bare away to get her going again. 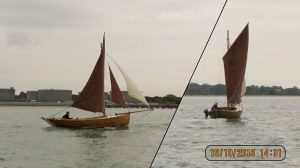 A police launch followed me towards the Hamble before accelerating past. It was now drizzling, and the geese were returning home! The wind was dropping off and rather than shake out the reefs I furled the jib and motor sailed with the main for a short time. Motoring back I passed a good looking double ended gaff rigged dayboat. Back in the Itchen they were dredging at Woolston Pier. I was back at the jetty around 1550 and docked easily in the now light winds. [38 nm, 10 hours]

Seatern Diaries > 2015 > October: "I join the NCI" > 19th October: To Lymington Approaches
Because we use Google Maps and other services, using our site may place cookies on your computer. If you continue to use this site we will assume that you are happy with it.Ok