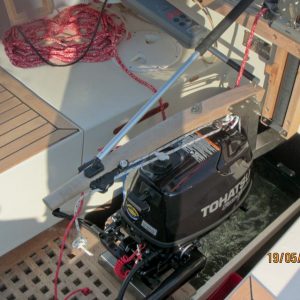 The Tohatsu manual says that the motor can use fuel with up to 10% added alcohol. Bio-ethanol (similar to what I use in my spirit stove) is being added to petrol in increasing amounts because it is considered a renewable resource. Some fuels have, or will have very soon, 15% added alcohol. Apparently this is OK for cars which get refuelled often, but bad if it sits around in a boat fuel tank for an extended period absorbing moisture in which case the water/alcohol mixture may separate out. How serious the problem is depends on who you ask.

The use of alcohol is an EU directive, so it is not surprising that the French company Total was one that continued supplying alcohol free fuel. Not wishing to compromise reliability I thought I’d buy my fuel from them but it turns out they have recently sold their retail outlets (in this area, at least, to Shell). Some brands of super-unleaded fuel have a lower alcohol content. Alternatively fuel additives exist to combat the problem – one is sold by Johnson/Evinrude.

Having collected my new Tohatsu outboard, I spent today driving around to places where I thought there was a Total filling station, only to discover they are all Shell outlets now. In the end I bought Esso super-unleaded which is suppose to be 5% alcohol content.

I’ve painted and engraved “Seatern” on the outboard cowl (as well as marking the motor with Smartwater) in the hope of deterring theft.

Seatern Diaries > 2014 > About Seatern > 17th May: Buying Petrol
Because we use Google Maps and other services, using our site may place cookies on your computer. If you continue to use this site we will assume that you are happy with it.Ok