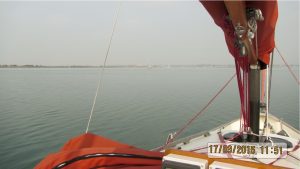 The morning started misty and, following yesterday’s dank weather, there was a lot of condensation inside Seatern. However the sun was soon coming through to herald a beautiful day – but flat calm! At 0825 I prepared to raise the anchor but my outboard, “Dai”, would not start – same symptoms as yesterday. I think he is being awkward since I told him I’d been on an outboard maintenance course!

By 0920 I decided to phone SeaStart (the Solent marine breakdown service which I joined at the start of the year). To my surprise, at 0930 I got a phone call from the Harbour Patrol. Apparently SeaStart at present do not have an operator in Chichester Harbour, the previous person having retired. The Harbour Patrol were willing to tow me to Sparks Marina to where SeaStart would arrange for a mechanic to look at Dai. 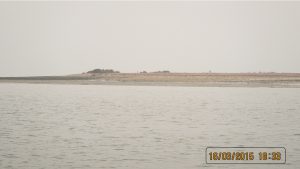 Around 15 minutes later the rib turned up driven by (I think) Phil Walker (Deputy Harbour Master). He suggested having ago at starting the outboard and one of his first acts was to prod the red kill switch and reseat the kill cord key. He said that that was sometimes a problem…. and then started the outboard! That the kill switch was causing the trouble fitted with my experience the previous day. He also commented that the official anchorage was on the west side of the channel, rather than where I was on the east side. After he left, I phoned SeaStart to tell them I would not need assistance afterall. 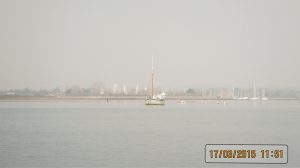 Up anchor at around 1030 and motored up Thorney Channel until the masts in the marinas at the (drying) channel end were in sight, turning at 1053 and getting back to the Camber South Cardinal Marker by 1125.

Went past Cobnor Activities Centre, where I think the Dinghy Cruising Association have an event this summer, reaching Bosham at around 1215. Returned via Itchenor (to look what the “jetty” – what I would call a pontoon – was like) before returning to Pilsey at around 1400. 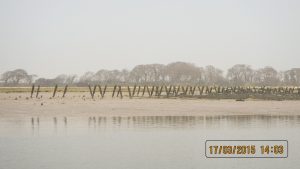 A feature of the part of the harbour I’d toured are the rows of stakes which apparently are the remains of a 19th century land reclamation scheme. The “goal Post” marks show where they cross the Thorney Channel. Since the approved anchorage is on the west side, above or below the goal posts I looked at anchoring there. However the bottom slopes rapidly down into the channel and it was hard to find somewhere to anchor with a long enough rode and yet without the scope potentially leaving me aground. I set a relatively short rode and motored the anchor in, hoping that it would hold. 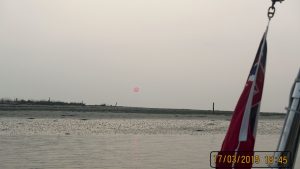 I spent the afternoon anchored rather close to the shore with both centreboard and rudder raised. You could see the mud/sand bottom through the clear water and neither it, not the exposed bank, would harm Seatern if she went aground – but the angle of heel would be uncomfortable to say the least! During the evening tide I let out a couple more metres of rode and set the alarm for 2am to shorten it again just before the next low tide.

I needn’t of bothered because I woke at 0130 to the sound of running water – like a nearby waterfall! Going on deck I found Seatern in the midst of the very fast flowing ebb current. The wind had increased and, with foils raised, Seatern was aligning between wind and current causing breaking waves at her bow! Shortening the rode seemed both highly unadvisable and needless, since the current was keeping Seatern offshore. If she did touch with the tide turning, it would be on an incoming tide. Perhaps I’d discovered why not many people use the official Pilsey anchorage!

Seatern Diaries > 2015 > March-April: "First Sail!" > 17th March: In Chichester Harbour
Because we use Google Maps and other services, using our site may place cookies on your computer. If you continue to use this site we will assume that you are happy with it.Ok