At last some settled weather, so I decided to sail to Chichester Harbour – although the tides were not ideal! Also, unfortunately I needed to be back for a flood meeting on the Thursday. 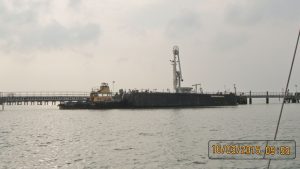 Monday morning was damp and spotting rain; I decided to wear my Mullion flotation suit to keep warm. Regretted it when my outboard, Dai, would not start. Would fire once but not continue. I noticed I was using the spare kill cord, swapped to the usual one and Dai started; very strange! Off at 0820, some 1 hour 20 minutes late, however not a disaster since it meant I would have less time before the tide turned favourable in the Solent. One of the sewage barges was being loaded at Woolston Jetty.

0900 – 0915 hoisted sails while motoring into wind off Weston Shore (this took a time because the main had been removed from Seatern for winter gales and the reefing lines were all bound up). It was a close reach down Southampton Water. The wind speed was up and down and sometimes heading me – at around 100 Seatern accidentally tacked in a temporary wind shift. Nearing Calshot the wind strengthened and I put in 2 reefs; was at Calshot by 1040.

Tacking along the Lee-on-Solent shore towards Gilkicker I was making poor progress – the tide book said the current should be with me but various buoys, fishing floats, and my track said otherwise! In retrospect I was probably too far from the shore. Being off Browndown at 1312, I calculated that it would be dark by the time I would enter Chichester Harbour so I dropped the sails and started to motor. Dai started, but reluctantly. 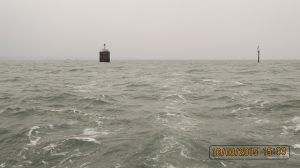 The direct path to West Pole (at the entrance to Chichester Harbour) was to use the gap in the Horse Sand submarine barrier. The barrier is only marked on the chart as a series of piles stretching out to Horse Sand Fort and going through the official gap there was no obvious surface expression of there being anything underwater. However Seatern did speed up as we went through the gap suggesting the current is funnelled through. I’ve since found a photo of the barrier on the web …here’s a small copy in case the original disappears. Motoring with the plate partly raised I’m sure Seatern could cross the barrier with no problem… but somehow it seems unlucky not to use the gap! 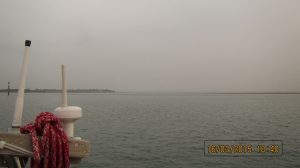 From the gap I motored directly towards West Pole – the first dolphin marking the passage into Chichester harbour – arriving at 1540. Tide times in the Harbour are similar to Portsmouth so I entered with the flood tide and reached the Pilsey Island anchorage at 1630. On my first attempt to anchor I ended out in the channel so I moved further towards the east bank and was finally anchored by 1650. I phoned the Harbour Office to pay the Harbour dues by credit card. The weather had remained grey but the a somewhat desolate feeling of the harbour was dispelled by skeins of geese passing overhead before nightfall. That was followed by the nearby noise of many seagulls starting to roost – however, despite my fears that they would continue all night, they quietened down later in the evening.