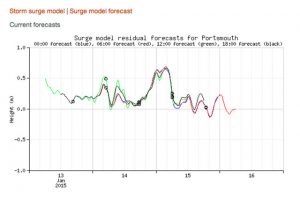 Not quite as bad as 2014, but January 2015 has started with day after day of strong winds; I removed the boom, mainsail and mizzen early in the month. I was sleeping on board on the night of Wednesday 14th during a force 9 storm. A 0.7m storm surge around neap low tide meant that Seatern started to float very early on the tide and for nearly one hour she was bouncing on the bottom with horrible grating noises! At least it should have cleaned up the anti-fouling!