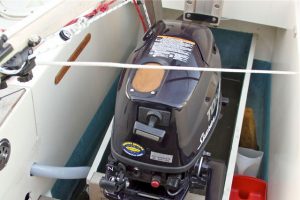 I got the outboard back from servicing yesterday. When I took it in I asked Kieron at the Rib Shop if there would be any problem in removing the internal fuel tank. I don’t use it and the tiller tamer rope is forever catching on the filling cap. Even if I thought of the internal tank as a reserve, the chances are that the petrol will have gone off if I ever try to use it! I was planning to remove the tank but Kieron offered to remove it during the service and blank off the fuel pipe at no extra cost. 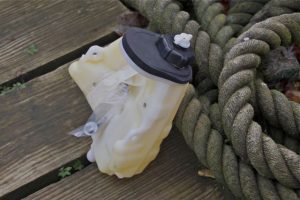 The removed fuel tank (shown in photo with the two bolts which held it) really is a complicated shape. It looks like they filled the available space under the cowl with expanding foam and used that as a template! I’ve made a blanking cap for the hole where the filling cap was using a bit of tufnol left over from fixing the cabin heater chimney. It’s bolted in place with some sealant to prevent water ingress. Not having the filler cap with it’s breather vent sticking up out of the outboard cowl will be a huge improvement! 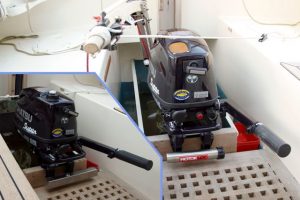 The new lock is an “Atlantic” slot lock (made by Outboard Motor Locks) which was rated as one of the best in the January 2010 Motor Boat Monthly magazine tests. A lock similar to the one I had previously been using was rated “weak” and they said they wouldn’t publicise “just how easy it was to get off”. The new lock is clearly much stronger and the locking mechanism looks much more likely to continue to work in the marine environment! Its fixed on so as to cover the outboard clamp threads too so those can’t just be sawn through.