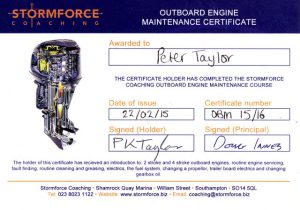 The inside of my Tohatsu outboard, “Dai”, is something of a mystery so I decided to do an outboard maintenance course at Stormforce Coaching*. They are just down the river at Shamrock Quay and I would have walked there except that rain and wind was forecast (and duly arrived mid morning). The course was so crowded they split us into two groups – there was a whole group from PGL holidays preparing for the coming season. There was also two mates from the James-Clark Ross who knew Mags and Robin from when we were using the JCR for experiments.

It was good to be able to work on outboards without the pressure of needing to have them back working. However it convinced me that, if Dai doesn’t start, things like taking the carburettor apart out on the water are likely to result in bits getting dropped through the outboard well… better to call SeaStart! I have now bought a “Mr Funnel” funnel which will separate water from fuel and hopefully stop muck clogging the jets. And I now have a certificate to wave at Dai if he is being reluctant to start!

* [Note added August 2017: Following the results of the Cheeki Rafiki trial, Stormforce Coaching no longer exists. In retrospect, while the teaching of the course was fine the organisation of it was bad; it was over-booked and at the outset, one instructor had not arrived. If that disorganisation extended to other parts of their activities maybe the loss of Cheeki Rafiki was an accident waiting to happen.]