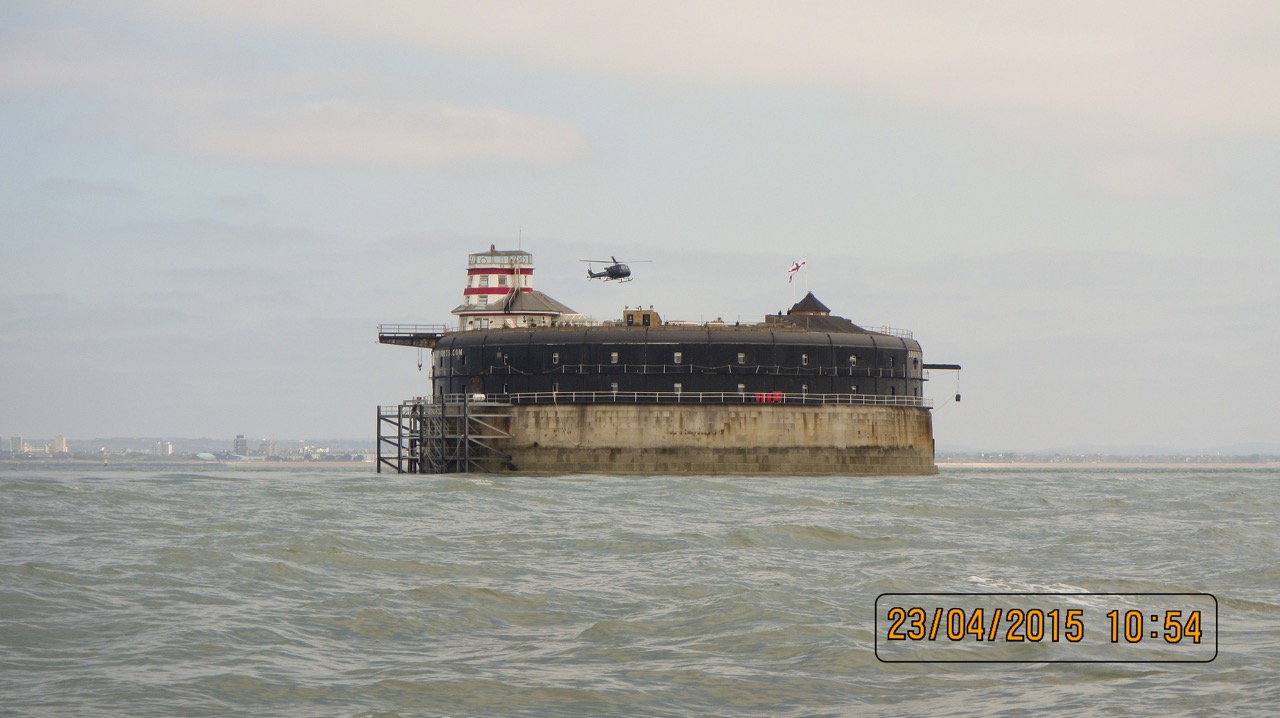 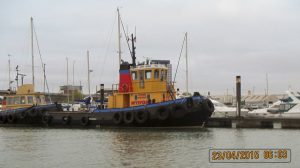 I had planned to go over to Wootton Creek and have lunch there but a second check of the tides showed there would not be water in the Creek! Realised that the Navlink application does not underline drying heights!

It’s been sunny but, as forecast, it was grey and cool when I left the jetty at 0535. The tug Wyeforce (of model boat fame) is looking much better having had a new paint job. A queue was forming at Dock Head as the Whit Challenger was waiting for a container ship to go down channel. I carried on motoring up Weston Shelf in order to get some breakfast before starting the beat down Southampton Water. 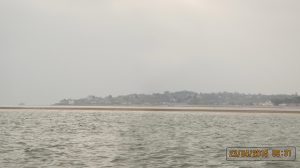 It turned out that the wind was enough easterly to hold a single tack down Southampton Water and across the Solent until I reached Ryde sands. The latter rise so steeply that you can sail close to their edge and look at people walking their dogs before having to tack!

I tacked again to avoid overfalls at the “Radar Post” port hand mark at end of the Debnigo bank. 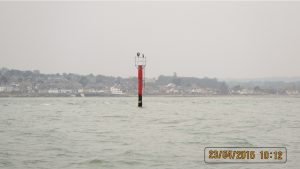 The rough water was extending seaward of the post towards the No Man’s Land Fort, since the current was still strongly eastward opposing the easterly wind. However the wind was dropping and at around 1020 I hove-to to plan what to do next. Given that the tide would not turn to westward going before around 1300 I didn’t want to be swept too far east with no wind for the return. 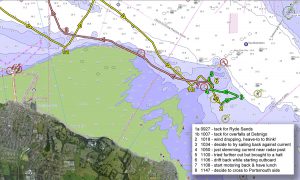 Having decided to start sailing back the wind dropped even more so on a broad reach Seatern did not have the speed to do more than stem the current off the radar post. I tried reaching out towards the Fort, but again came to a halt – if anything we were going backwards.

A container ship was coming from Southampton and, being lightly loaded, caused quite a wake. It features in this movie of “Sailing on the Spot” – about the only thing which happened! A helicopter did land on the Fort. I gave up and started my outboard “Dai” during which process Seatern went eastward quite quickly. 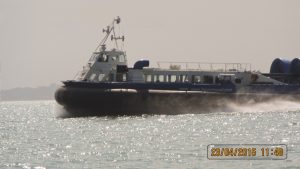 Motoring back along the edge of Ryde Sands, once I’d recovered from inhaling a lung full of exhaust (which almost made me sick), I had some lunch. The hovercraft and catamaran ferries coming out of Ryde both crossed close astern. I was aiming for the west going eddy which the tide atlas showed beyond Ryde Pier. However that would still leave me having to cross the Solent with an east going tide, so I changed my mind and crossed towards Gilkicker point.

Having dodged a couple of ferries and started motoring parallel to the mainland shore the wind picked up. I turned east to hoist the main and then rigged and hoisted the asymmetric rather than unfurling the jib. Under sail on a broad reach from about 1230, at 1315 I started to empty the ballast tanks which took around 20 minutes. What looked like the Harbour Master’s “Southampton Patrol” approaching at speed turned out to be the Police launch – they did slow down to pass me!

The wind remained quite light but during the stronger periods Seatern was making over 4 knots over the ground. Once into Southampton Water I gybed the spinnaker and managed to run goose-winged. A few cruising yachts off the Hamble were either wallowing or under motor but with ballast tanks empty Seatern was managing 3 to 4 knots over the ground, maybe 3/4 kts being due to current. To keep the asymm full I was having to hold the sheet away from the hull which was tiring – I must devise some sort of whisker pole.

Dropped the sails off Weston at about 1530 and while motoring towards dockhead a Portsmouth-Ryde type hovercraft cross ahead putting up clouds of spray – I would have been soaked if any nearer! There was also a smaller hovercraft with 5 people on board – presumably all from the Griffon Hovercraft Works just up the Itchen. Otherwise the river was quiet and I was back at the jetty by 1640.

[post-script: I slept on board that evening and was woken at 11pm by an alarm going off. It was the CO alarm which was showing 50ppm. That level would not normally trigger an alarm unless it had persisted for a long period (the alarm integrates exposure). I had nothing on to generate CO, there was no smell of burning, and the battery discharge rate were normal, so I removed the alarm battery and went back to sleep. I assume it was lingering engine exhaust fumes since a lot of the motoring had been down-wind.]