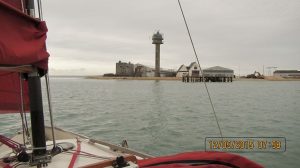 Planned to leave at 0530 and head for the western Solent but didn’t get off until 0600. Continued to motor up Southampton Water while I had breakfast. For once I managed to motor slowly into the wind while hoisting sail at around 0700 off Netley Castle. The wind was increasing but still quite light so no reefs… a broad reach but a bit too close for the asymmetric. Crossed the shipping lane past the Esso Oil jetties and kept close in at Calshot to keep as high on the wind as possible. 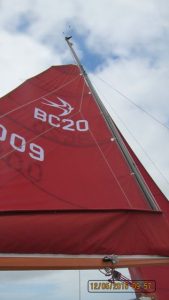 I planned to do a long tack across the Solent to pick up the strongest part of the ebb. However the wind was picking up fast and the clouds lowering so I tacked to get out of the shipping area before (at around 0840) putting in two reefs. Way ahead a Thames barge was heading for the western Solent with all but the top sail set. 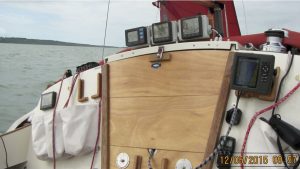 Given I was beating into a strengthening wind opposing the tide I was worried a wave might jump aboard so, for the first time ever, inserted the wave boards before continuing to sail. A long tack made good progress across the Solent before going about to avoid rough water over Saltmead Ledges.

To exploit the favourable current I was tending to pinch up in the gusts rather than ease the main sheet, but that results in a lot of weather helm. It would be good to ease the mizzen but it flogs if not fully sheeted. On the next tack I decided to heave to and furl the mizzen (also taking the chance to brew a cup of tea). What a difference without the mizzen! Seatern was now much lighter on the helm and seemed no slower. I really must figure out a roller furling system for the mizzen; I’m glad to have it but will beat without it more often in future. 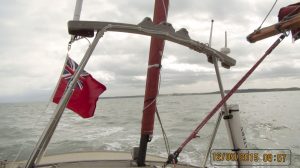 At 1020 I shook out one reef but kept the mizzen furled and by 1040 I was approaching Yarmouth. After another tack across the Solent, by 1100 it was apparent that the tide had turned. By 1150 I was nearing Hurst Castle but making poor headway against wind and current. I wondered about motoring through Hurst Narrows but decided instead to head across to the shelter of Hurst Spit and anchor inside the spit to have lunch. Dropped the sails and started motoring in the Hurst roadstead at about 1155. In the shelter of Hurst Spit the sky was blue, the sun glistened off the waves, and the wind was now stronger than ever – it reminded me of the Mistral in the Gulf of Lions (but with smaller waves)! 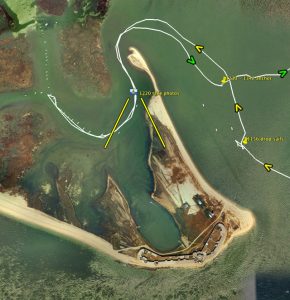 I wanted to look at the anchorage inside Hurst Spit which is supposed to be between the entrance and the first moorings. In the panorama (top) there looks lots of space but the moorings come almost to the entrance – I think about 2 boats could anchor before there would be a risk of anchor warps tangling! With the strong wind and the tide low I didn’t try to anchor or pick up an empty mooring – the chances of being blown aground would be very high! I had a quick motor down to a point where I could turn round and returned passing the Keyhaven to Hurst ferry on the way out. Near the “anchorage” I took some photos looking back.

I anchored in the shelter of the Spit to eat lunch and wondered if I’d have the strength to up anchor against the windage on the boat or would need to use the motor. I managed it but the new “anchor strakes” proved their worth the first time of asking. When having to haul hard on the chain it is not possible to use the bow roller, which in any case is restricted by the bowsprit which I had extended to keep the side deck clear. Having up-anchored with the mizzen set I used the jib to bear away and miss a fishing excursion boat which had anchored directly downwind from me.

Under jib and mizzen with the wind on the starboard quarter and with the help of the flood tide the GPS was regularly peaking over 8 kts on the swells and once reached 9.5 kts. A plot of the winds measured at the Bramble Met Station shows that during the afternoon the average wind was force 6 with gusts touching force 7.

By 1450, about level with the Beaulieu River, Seatern suddenly broached across the wind and I couldn’t get her back on course. Thinking the mizzen must be over-powering her I got it furled allowing Seatern to bear away under the jib. With more time to check things I realised that the rudder downhaul cleat had released allowing the rudder to come up… hence the broach. In retrospect I think the rudder must have touched bottom while in Keyhaven River and part sprung the cleat (which is meant to release if the rudder hits ground). 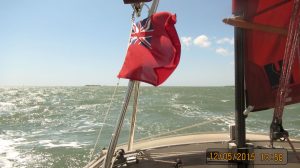 Back on course, Seatern was still doing over 6 kts GPS under jib alone, although possibly 2.5kts was probably due to current, so I left the mizzen furled. It would be a close reach/beat up Southampton Water and I was curious how well she would sail under the jib – in fact she sailed remarkably well. Incidentally, there are now even more fishing floats deployed – new grey polythene cans off Calshot Spit and dark blue ones near the Hamble, why can’t they choose a colour that is visible? 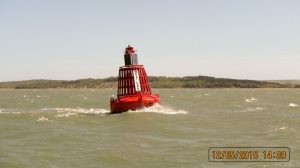 Despite the increased shelter and reduced current Seatern continued up Southampton at around 4kts until I started the motor at around 1700 off Netley and arrived back at the jetty at about 1750. I was pretty tired by then and in putting Seatern to bed, managed to swing out on the boom and fall into the river!!! It would have made a good PBO cartoon! 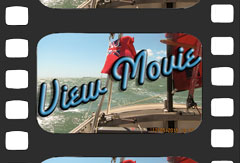 I’ve made a movie using clips recorded during the day, it doesn’t feature me falling in! [47.7 nm]