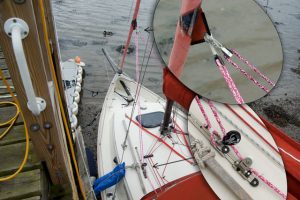 The sail on the 10th June may have been very short but it was long enough to prove the new jib sheet arrangement didn’t work! I think the friction on the sheets from mast etc. was enough to engage the ratchet blocks at the wrong times when going about. I therefore decided to replace them with ordinary blocks (out of the “bits drawer”, from Seafly 650 I think!). I’ve moved the ratchet blocks back to the track but I don’t think they will work there. In the photo it looks like they definitely won’t work! However the angle is better when the jib is not furled and has been sheeted in. At the moment the sheets are also lead through the track fairlead blocks to align the sheets with the holes in the Spray Hood. However that is probably a bad idea since it will add friction. 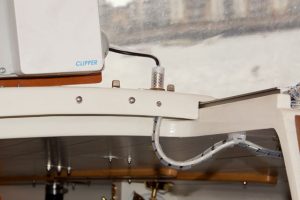 Also on the 10th, the hatch top instruments stopped working. I’ve probably damaged the cable when using the winch to tighten the main halyard. That operation entails taking the halyard at right angles out of the clutch and across the aft face of the hatch cover to the winch. On the Swallow Boats Forum, David Hudson has pointed out how I can avoid that piece of bad practice by rerouteing the halyard.

Since they don’t use much power, the instruments are connected via a 5 core burgler alarm cable. The cores are very fragile and either the +ve or -ve power connections (at least) must have broken. I replaced the cable with a new length threaded through a 1/2″ tank connector which will be stronger than the plastic glands used previously. There is also a connection cable to a 12V socket. This cable is presently disconnected and only serving to support the other cable.

Finally, I modified the breather pipe for the power system (“work in progress”, contact me for details).