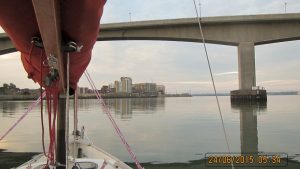 Left jetty at 0500, the 0520 forecast (Selsey Bill-Lyme Regis) was still SW 3 or 4, fair, good. In the river it really was flat calm but there was a very slight breeze on Southampton Water so I set main, jib and mizzen and by 0555 was pumping out the ballast tank while having breakfast.

By 0620 the ballast tank was empty and by 0635 the asymmetric was set and just about filling for the broad reach down Southampton water. However as the wind strengthened it was backing and by 0730 I had to bring the asymmetric down in order to harden up to clear Hamble Spit. 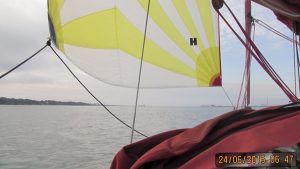 Knowing that there was not that much time before the tide turned eastward I had decided to beat up the western Solent and see how far I could get, rather than go into the eastern Solent and have to fight the tide coming back. With the wind freshening rapidly, between 0740 and passing Calshot at 0800 I refilled the ballast tank and began beating towards Cowes.

In retrospect some of the freshening effect was due to getting away from the night time land effect, as the plot shows (the grey areas indicate when Seatern was in Southampton Water). When I returned later in the day the wind was much stronger near Dock Head, presumably because of a sea breeze effect. 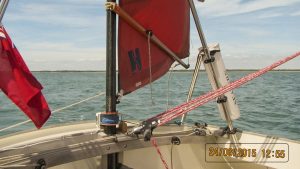 The tack towards Cowes took me over the Bramble Bank and I was surprised just how well the variation of depth shown by the echo sounder matched what was shown on the chart plotter. I would have gone almost to Cowes but was headed and went about, briefly heaving to and furling the mizzen. Seatern is better balanced with the mizzen furled but possibly looses a bit of speed. The other disadvantage of my mizzen furler is that the mizzen mast makes more noise in the socket; presumably that was what the original rubber covering was there for! 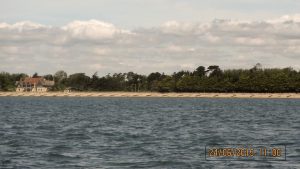 After another few tacks it was obvious that I’d lost the tide and I tacked over to the mainland shore to minimise the strengthening flood current. Just after Througham House there is a line of posts extending seaward and a “no anchoring – obstructions” zone marked on the chart. Despite the latter three of the smaller fishing/work boats were anchored there for rod and line fishing. I did a couple of tacks to get to the west of the boats and no anchoring zone and (around noon) dropped anchor. Already there was a significant current which would only strengthen. Worried I might struggle to up-anchor, I left the main and mizzen set and departed at 1220 after having set the battery on charge and had a quick lunch. 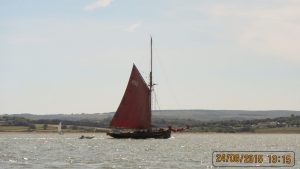 Rather than a dead run I headed more towards the Island knowing that the current would take me westward along the Solent. In the event I ended up approaching Gurnard where I saw the Jolie Brise motoring against the tide. After gybeing I was soon well into the precautionary area and seeing a “small” container vessel outbound I hardened up so as to give her room to turn at the Bramble Bank. 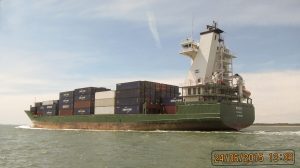 After a few minutes she still was not turning so I let out the main and jib and waited to see which way she was bound… in the end she passed quite close ahead of me bound for the Needles Channel. With another ship outbound according to the VHF, once near Calshot I gybed and reached across the shipping channel before commencing a lively reach down Southampton Water. Seatern was singing along at 5 to 6 kts over the ground and most of that being speed over the water. At the Hamble Jetty the tug Apex from Fawley crossed close across my bow. 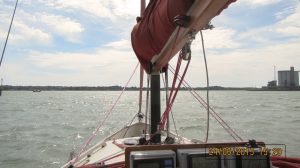 By the time I dropped sail off Weston it was really quite windy. Having negotiated the Activities Centre dinghies the river was relatively quiet. The wind was pushing Seatern onto the pontoon and I had to use quite a bit of reverse to slow her down and then to hold her away from one of the piles that Mike and Hilary’s yacht had used. Back at around 1600 after 38.8nm.