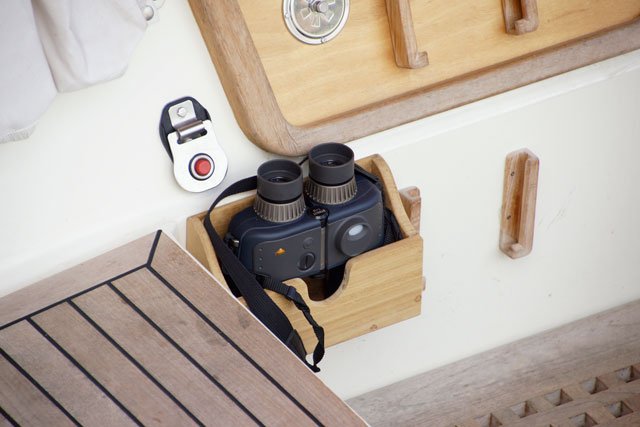 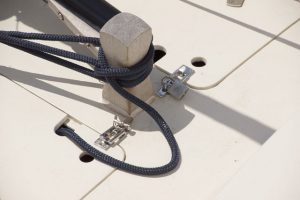 Anchor hatches: I’d been meaning to put some sort of catch on the anchor lockers lids for some time – if I did capsize Seatern, having the anchor and chain and/or the mooring ropes fall out of the lockers would only add to the chaos. I can’t decide whether to secure them with padlocks or drop-nose pins. Unlocked padlocks would stay in place OK while sailing and would deter the curious when Seatern is at the jetty. However they wouldn’t deter a thief (do people steal anchors?) and a pin is probably the best option if I can tie it on some way. 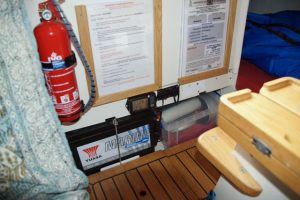 Battery Board + Toilet Grating: I needed to repair the mount for the narrow board above the battery area which has 12v sockets, a battery monitor, and connections for the power system. When I was trying to use the electric outboard there were two batteries below and two battery monitors on the board and the sockets were wired so as to allow the batteries to be swapped in function. 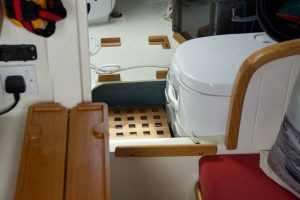 A piece of one of the teak supports for the grating in the well holding the toilet was an ideal choice for a stronger board mount, and also to form part of the mizzen furling system. So first I rebuilt the toilet grating! For that I needed some teak off-cuts from Howells in Poole plus one of their dinner plate trivets (which is what the grating really is!).

Binocular Box: The main reason for visiting Howells was to buy a binocular box – theirs are about half the price of Force 4 and they have a range. I took the binoculars along to get the best fit. 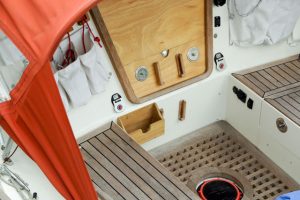 With all the traffic in Southampton Water and the Solent there are times that the binoculars really need to be at hand. I’ve been perching them in the halyard pockets but that’s not very secure. I’ve put the box in about the only place available. I was worried it might be in the way there but it’s no problem at all; a great improvement! The panel under the companionway is thin ply but I was able to screw into the back of a picture frame on the inside where copies of the various boat’s papers, radio licences, etc. are kept.