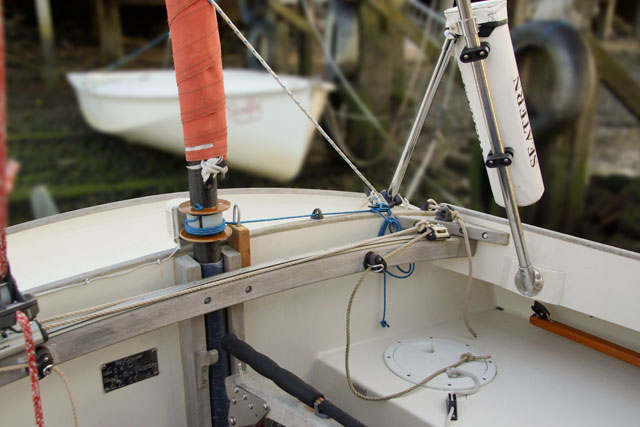 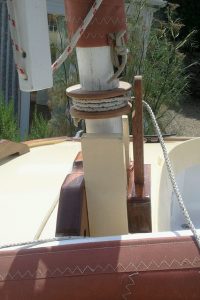 On the 12th May I discovered what Julian Swindell has said for some time – that a BC20 sails upwind better with the mizzen furled. However, I’m not tall, and with the standard arrangement I find it difficult to reach over the tilted up outboard to rotate the mizzen mast whilst controlling the boom and, if there is any sort of sea, also hold myself in position. I often find it easier to stand on the aft deck where I can close clip myself to the boom gantry leaving my hands free to furl the sail. That method also helps in keeping the boom on the correct side of the gantry so it can be lashed to the furled mizzen using sail ties. But, if I’m going to be furling the mizzen more often whilst sailing, a better method is needed.

Roller furling systems have been discussed on the Swallow Boats Association forum and Jim Levang in the US built a furling system into his BC20. I’ve tried simply wrapping a rope around the mast – it will work if it’s calm! But Martyn Miles showed a particularly well made example of the sort of thing that’s really needed (see his photo, above). I decided to make something similar if less skillful! 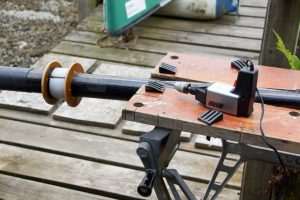 At the height where a furling drum could be fitted the tapered mizzen mast is about 2″ in diameter. I ordered some nylon tube from Metals4U which was described as 60mm OD, 50mm ID. In fact the internal diameter turned out to be about 48mm which actually turned out an advantage. Cut lengthwise the two sections of tube could be deformed using a jubilee clip to clamp very firmly around the mast. I held them in place using cable ties while screwing annular disks cut from tufnol (left over from fixing the cabin heater chimney) to the nylon, top and bottom. I needed to drill the screw holes in situ so used a Mini-tool drill bought for model boat work! I’ve left the cable ties in place although they should not now be needed. 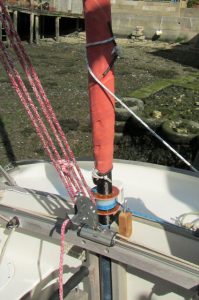 The base of the BC20 mizzen mast has a hard wood insert which sits on a stainless support which forms part of the mechanism to hold the mast in place. I sanded the hard wood disk and applied silicon furniture polish. I also wrapped “Chafe Tape”around the rubber sleeving on the lower mast to reduce friction between it and the hull. To accommodate the extra thickness of the Chafe tape I had to insert penny washers under the screws holding the stainless support. I found that the mast then rotated freely. 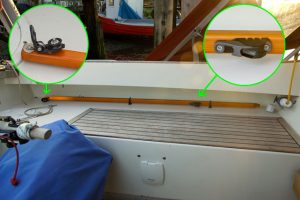 I decided to make the mizzen boom removable by substituting a snatch block at the clew end where the outhaul was previously led through two holes to provide a 2 part purchase, albeit with very high friction. I replaced the clamcleat for the inboard end of the outhaul with a side entry type but found I could still use the keeper with the new cleat. The boom store in paddle clips under the port side deck. 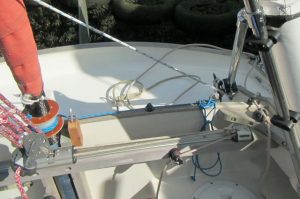 I fixed a horn stanchion cleat to the aft leg of the boom gantry to hold the outhaul when the sail is furled. The furling line is led from the drum through a guide (made from bent alloy rod), through a small fairlead to a small horn cleat.

So far I’ve only used the system while sailing a couple of times on the 10th June but it seems to work well.