10th July: To Hengistbury Head and back 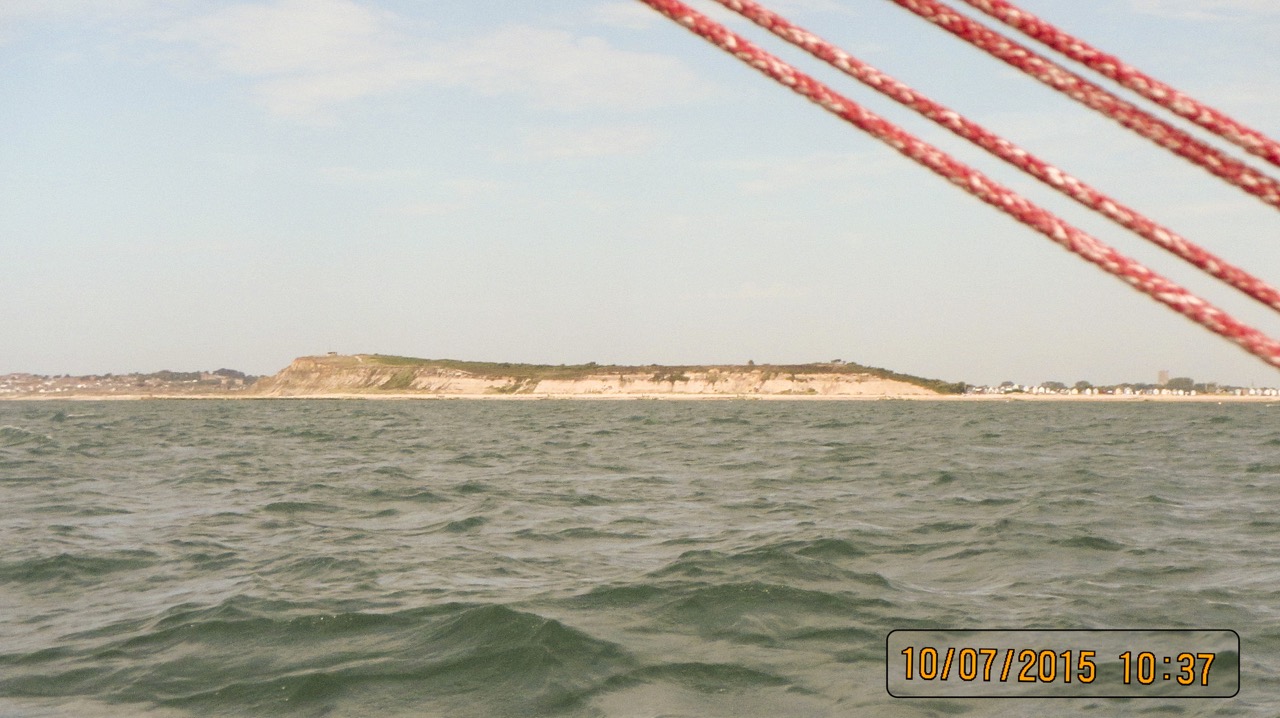 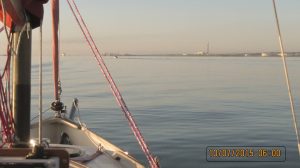 Left jetty just before 0500 soon after Seatern was afloat, having done some of the preparation last night including hoisting the fender board (the tide was out overnight) in order to lower spray hood, drop mizzen, etc. Beautiful, but very calm morning so, needing to catch the ebb in the Solent to get to Hurst, I motored down Southampton water. 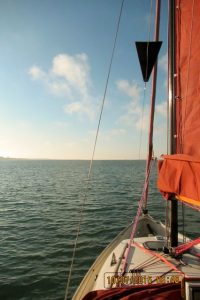 By 0620 I’d had breakfast and set the mizzen and main. However the little wind there was would have meant tacking so I continued under motor. A new starboard hand buoy has appeared – “Fawley Deep” situated near the Hamble Oil jetty – good because it was hard to know whether you were in the shipping channel around there. 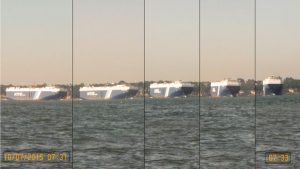 I waited for ferries to pass before switching to sail and bearing away to cross the shipping channel near Calshot and cutting across the shallows off the Spit. An inbound car transporter was making it’s turn at the Bramble Bank.

Having picked up the main ebb off Lepe, Seatern was making 6 to 7 kts (GPS) close hauled. I saw a fishing boat servicing a pot marker ahead but when I passed the marker was towing under in the current with just a V wake showing it’s position. Why do fishermen get away with setting hazards for other water users? Even mid-week and before the school holidays there looked to be a lot of masts in Newtown River. 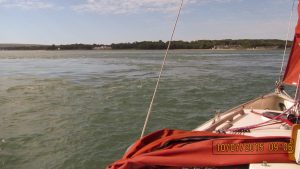 Around 0900 I was surprised to see upwelling eddies some distance before the Narrows. Some 15 minutes later Seatern touched 9 kts (GPS) going through Hurst Narrows and I bore away to take the North Channel towards Christchurch Bay.

Once clear of the Shingles I set the asymmetric. Seatern was now singing along at 6 to 6.5 kts despite the weaker currents in the Bay and it felt like dinghy sailing. I took some video but the speed fell off a little because I had to let the Tiller Pilot steer while I held the camera in one hand and the asymmetric sheet in the other – I daren’t cleat the latter!

With the wind still south-easterly and slack water at Hurst about 1140, I decided to turn back at 1030 so as not to hit the narrows at full flood and wind against tide. Having hove-to I continued to drift to within a mile of Hengistbury Head while I tidied away the asymmetric. Mindful that the wind would feel stronger going back I put in two reefs and furled the mizzen for the beat. I got some lunch from the fridge and closed the waveboards. Probably this was over cautious, however when I did go below during the beat I found that water was being forced up into the sink – which drains into the centreboard case – despite the no-return valve. 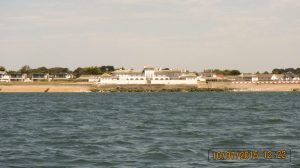 A single tack took me past Barton-on-Sea and towards Milford-on-Sea. Rather than tack out I started “Dai”, the outboard, in order to shorten the time to get back to the North Channel, and hence Hurst Narrows. In case of gusts around Hurst I furled all the sails. In fact, the Narrows proved relatively benign. There was rough water over the Trap and a small container ship heading out but less wind in the shelter of the Isle of Wight. Resetting the sails was hindered when a yacht, apparently practicing man-over-board drill with a buoy, decided to come round again forcing me to bear away with the mainsail part raised. 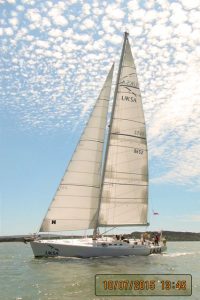 With the shelter of the Island, after about 20 minutes I shook out the reefs but left the mizzen furled. A UKSA yacht over-hauled and passed me but, to be fair to Seatern, the Tiller-Pilot was helming and missing the variations in wind direction. Later another yacht (about 35′ ?) tacked to follow us but, with the wind getting gusty, I was helming and Seatern proved to be sailing higher and faster. It’s rare that she is out-paced to any degree by larger cruising boats – racing boats are another matter! 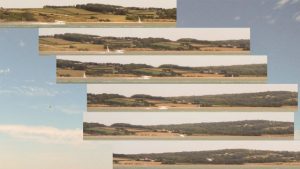 A float plane had been circling overhead and it landed towards the Island shore, then taxied around and took off again. I bore away towards Calshot and, now out of the Island’s shelter, found it was still quite windy!

Seatern was now over canvassed but it would be a run up Southampton water so I sailed her like a dinghy, pinching and back-winding the main from the jib. The Bramble Bank met station was not working but the winds from Dock Head were consistently at the top of force 4, gusting force 5, and it was probably stronger in the Solent.

Having again waited for ferries by hugging the Calshot side, I crossed to outside the greens and started the run goose-winged up Southampton Water. The J Class yacht Ranger was motoring down the Hythe side as I hove to off Weston and slowly motored into the wind to get the sails down. 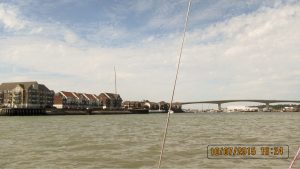 By the time I turned into the Itchen her mast was towering above the Ocean Village houses. I was early on the tide so motored slowly up the River – even then I had to do a turn of the “home basin” before there was enough water at the jetty. Docked at 1725 having sailed/motored 57nm. Seatern has now done about 1035nm – her first 1000!