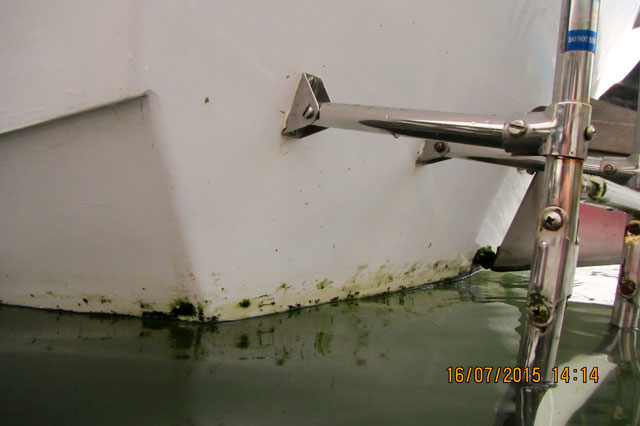 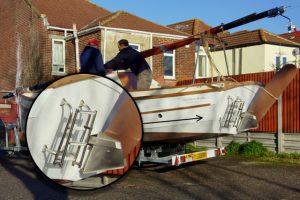 When Seatern was delivered the transom ladder was parallel with the transom. This meant that in climbing it you were negotiating an overhang. While I could do this (especially being aided by the stern gallows), I had my doubts about doing it if cold, tired, and in wet sailing gear; that is in an emergency. Having finally got around to looking at it, I’ve realised that it is just bolted together and therefore relatively easy to modify. 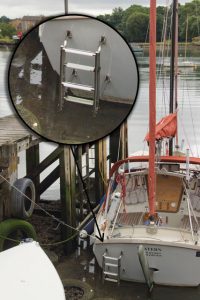 I’ve made new bottom struts out of 22mm marine stainless tube. The new struts are 22.5 cm long as opposed to 10.5cm before. This should make the ladder vertical when Seatern is floating. Having finished the mod on the 16th I tried it out by swimming around Seatern. It is much better, although there is still a slight overhang because the ladder is fixed below the transom top. I can’t imaging how I managed with the old ladder! 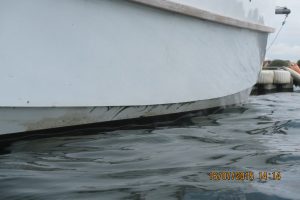 While swimming I took some photos of the weed growth areas near the waterline (see top left photo, more are [here] ). The anti-fouling looks pretty clear of growth but weed is attaching in the “boot top” region. In August Seatern is going back to Swallow Boats to remedy some small paintwork defects and the idea is to extend the anti-fouling higher to cover the boot top. 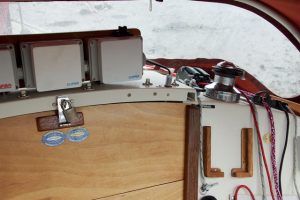 Other jobs: After about 18 months I’ve finally cleaned up and varnished the mount for the cabin hatch lock. When Seatern was first delivered I used an offcut bit of 18mm marine ply as a “temporary” fixing for the hasp. Despite not being varnished and protected only by the spray hood, the Robbins supplied ply showed no signs of deterioration – it was expensive ply though! 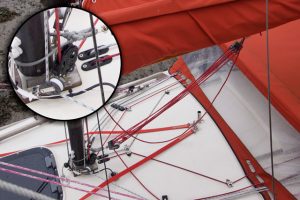 Also, following a suggestion on the Swallow Boats Association forum, I’ve also rerouted the main halyard to the starboard side of the cabin top where it can be tightened using my one winch. I don’t know why I didn’t think of it myself! The halyard now crosses above the centreboard control lines, through a deck mounted block off a previous Seafly, to a Spinlock XAS clutch fixed next to the clutch for the jib. The front clutch fixing is beyond the all-ply part of the cabin roof, however the halyard goes through a Harken ratchet block at the mast base which should take most of the load off the clutch. 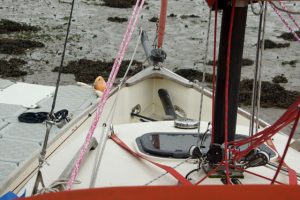 I’ve used the old main halyard clutch (on the port side) for the spinnaker tack line which previously went to a horn cleat on the starboard side. Hopefully this will be an improvement when setting the asymmetric. Not only will the clutch be quicker to use, but the tack line is also out of the way when deploying the anchor. However until I’ve tried it I keep thinking there will be some unforeseen snag!