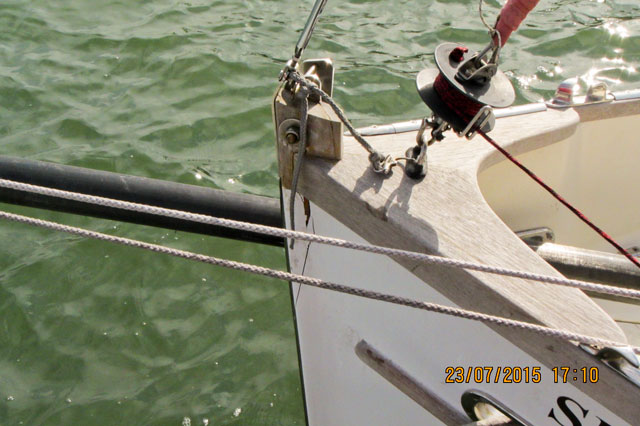 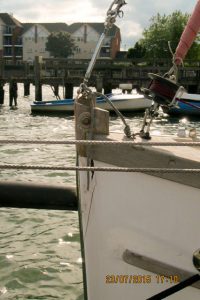 Returning to the jetty on the 23rd July there was a good amount of wind pushing Seatern towards the jetty and I had the outboard in reverse to slow her down. Having more or less brought her to a halt I made the mistake of putting Dai into neutral before going forward to step onto the pontoon. The wind pushed Seatern forwards and the bow roller just caught the corner of the jetty making a horrible cracking sound.

I have to admit that, on one of Seatern’s first outings I had managed to hit one of the starboard hand navigation piles! Not at any speed and head on but it had made some very minor cracks in the top of the stem head teak. These I’d filled with epoxy to stop water penetration and I’d not worried about them. However this new collision had opened up the old cracks much more and there was a worrying diagonal crack in the stem. Probably the previous incident had weakened the stem head with the result that a relatively slow speed collision did significant damage. 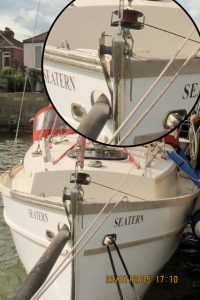 Since the damage was where the forestay was attached I decided I couldn’t sail Seatern again until it was repaired. I was supposed to be taking someone out to the Needles area on the Sunday or Monday and had to cancel, in fact gales meant we wouldn’t of gone anyway. The America’s Cup racing in Portsmouth was cancelled on the Sunday amidst gales and rain! Having sent photos of the damage to Matt at Swallow Boats he replied (although on holiday) that the damage looked “eminently repairable”. Later, when I took Seatern to Gwbert I found out why. The diagonal crack is where there is a scarf joint between the teak stem head and the rest of the stem. The stem is actually added to the hull after the planks have been bonded. This is illustrated in the photos below which were taken while Seatern was being built. 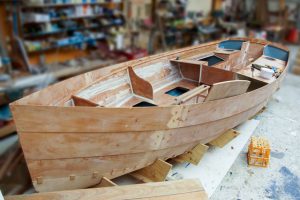 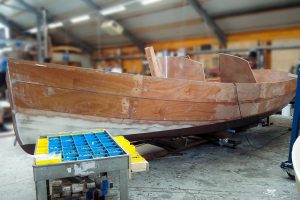 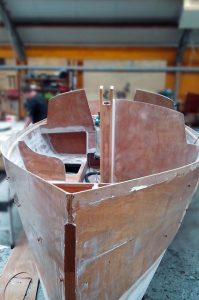 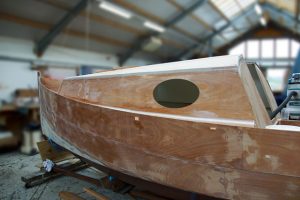 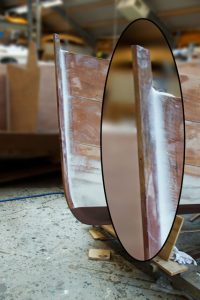 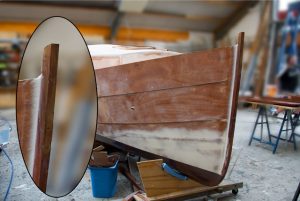