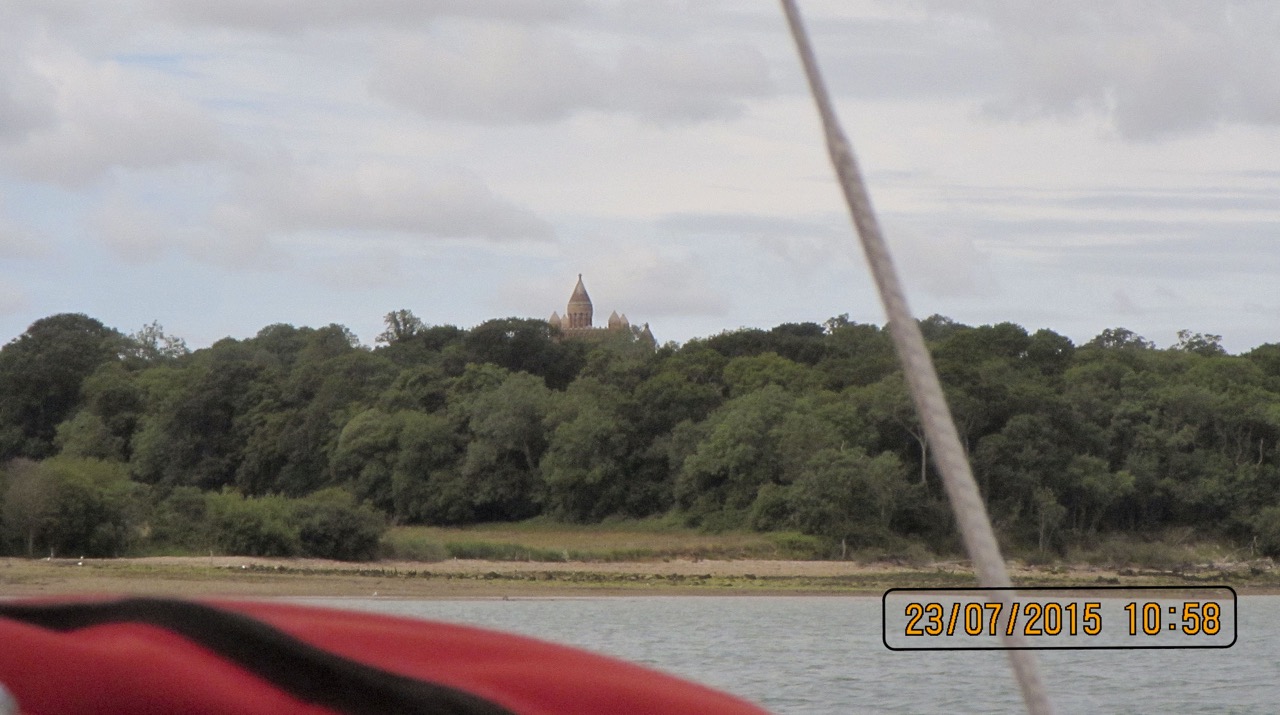 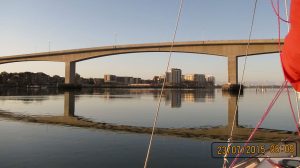 Left 0540, beautiful morning but no wind. By 0645 was motoring in Southampton water having had breakfast. Some suggestions of wind on the water so set main, jib, and mizzen and thanked Dai, my outboard. By 0705 had the asymmetric set and had started pumping the ballast tanks. What little wind there was was from the NW, so more or less astern. By 0730 the ballast tanks were empty and I had the asymmetric poled out using the boat hook. Somehow it didn’t fall over board. 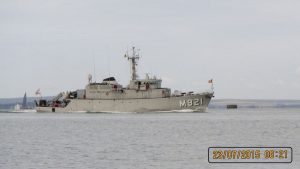 At about 0800, nearing the Esso jetties, the famous J Class yacht Valsheda motored past. Apparently she was bound for a photo session with Ben Ainslie Racing off Portsmouth. Some 20 minutes later two Belgian Mine hunters, Crocus and Lobelia, passed having come from Portsmouth. In the distance a large fleet of yachts were gathered off Gurnard, presumably racing. 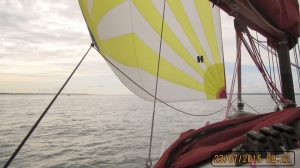 The wind stayed light but backed a little. I was headed towards Ryde but didn’t want to find myself fighting the flood tide over Ryde Sands (as I’d done on the 23rd April), so at about 1020 I got the asymmetric down and hardened up towards the shore at Binstead. 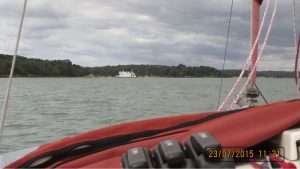 Having identified the post at the end of Binstead Hard (as listed in the Solent hazards book) I tacked along the shore and started refilling the tanks in anticipation of more wind (which proved a wise move). After a couple of tacks I dropped anchor at 1100 to have an early lunch before turning for home. I was anchored in sight of the ferries going into Wooton Creek, Quarr Abbey visible over the trees, and, looking back, Ryde pier. When I checked my position on the Navlink app on my iPhone it said I was in a restricted anchorage area. However nothing was marked on the chart plotter or on my paper chart of the area. 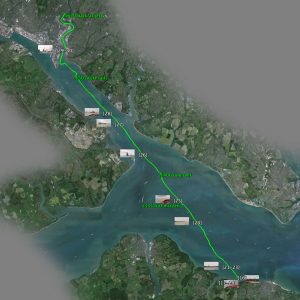 Up anchor at 1210, the wind had increased and with main, mizzen and jib set Seatern was really singing along. I’d guess about 5 kts through the water, however with the eastward flood now setting in we were only doing between 2 to 3 knots on the GPS. The recorded track back looks like I headed in a straight line for Southampton. At the time it felt nothing like that! At first I was pointing towards Cowes as if sailing close hauled along the Isle of Wight coast. Once I was off East Cowes I freed off to cut across the current towards Southampton Water. The wind having now really picked up, rather than reef I furled the mizzen and was sailing dinghy style with the luff of the main backwinded by the jib. 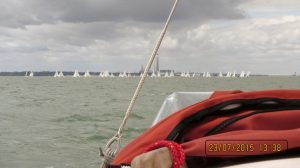 A large racing fleet was up ahead but fortunately by the time I reached them they were off Calshot and I passed between the Committee boat and the starting line. Anticipating less wind once within Southampton Water I’d been putting off reefing, however the wind was now at the top end of force 4 and gusting force 5. I was worried that it might continue to increase so put in a reef to be on the safe side. 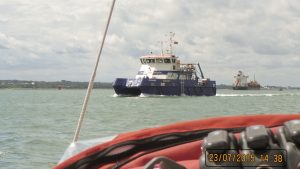 Just past the Hamble Oil Terminal a catamaran workboat coming towards me turned out to be the University Research Vessel Callista which is based at the Oceanography Centre. She passed quite close and when I waved to her the people on the aft deck (who looked like scientists rather than students) turned and all waved. I wondered if someone on the bridge using binoculars had recognised me and told them who I was. If so it would be surprising, I doubt if many on the University side would still remember me. 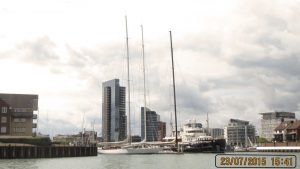 There were no less than three J-Class yachts in Ocean Village Marina. Apparently there is going to be a J-Class regatta as part of the Royal Yacht Squadron’s 150 year anniversary. The wind was still blowing when I got back home and I accidentally let Seatern blow past the pontoon hitting the bow roller on the corner of the jetty and doing some damage – I’ll recount that in a separate entry.