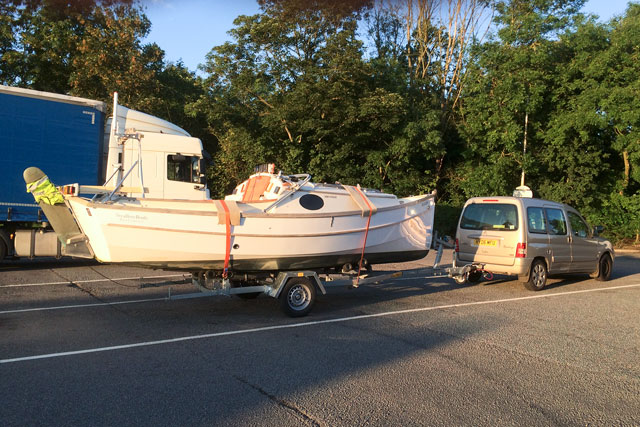 In order to take Seatern to Swallow Boats for paintwork, I’d arranged for a local boatyard, Kemp’s, to lift Seatern out on the 6th August. Now Seatern was damaged, I arranged for them to bring that forward to 1030am on Thursday 30th July, about the first date with a suitable tide. The advantage of using Kemp’s rather than the Priory Road Hard was that it provided a reasonably safe place to prepare Seatern for the journey, what’s more they gave me a good “local resident’s” discount on the lift and wash down. 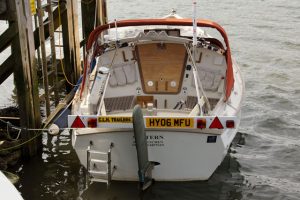 Having not trailed Seatern before, there seemed lots to do. I had decided to empty Seatern of all the sailing gear in the hope that less would go back into her on her return! This, and taking off the mast and outboard was not helped by the neap tides which meant she was always well below the jetty. I freed up the trailer rollers using lithium grease which I also used on the ratchet thingies on the tie down straps. Neither my 12V nor my foot pumps were designed for the 66psi trailer tyres so I bought a new pump (RING “RAC900”) – although I later realised that the inflatable dinghy one could reach the required pressure. I made a framework to attach the number plate to Seatern’s boom gallows so that it would be more visible, and nearer the back, compared to fixing it on the trailer. 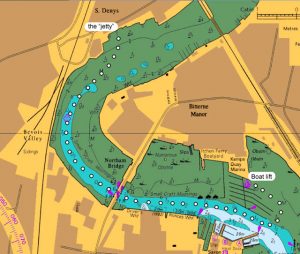 I took the trailer to Kemp’s on Wednesday morning, and drove the car there early on Thursday. I allowed 30 minutes to motor Seatern round using the Torqeedo outboard. Getting into the lifting bay was tricky using the electric outboard – I’d forgotten how lacking in instant torque it is. 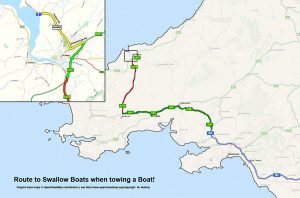 However it went smoothly enough and I was hardly out of Seatern before she was out of the water – no time for photos! Given that she had been “in the water” since December 2013, I was pleased how little growth there was on her – in particular no sign of barnacles. By 1100 Seatern was parked on her trailer and I spent a couple of hours getting her tied down for the road – not having done it before! 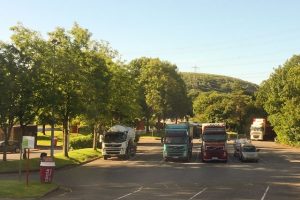 Rather than try and hook the trailer up in the dark I left the car attached at Kemp’s and walked back home (about 30 minutes). Returning at 0430 the following morning (Friday) I had a (thankfully) uneventful trip to Swallow Boats going via the A34, M4, A48 to Carmarthen, then the A40 to Narberth from whence the A478 leads to Cardigan. I met the wheelie-bin truck on the Cardigan by-pass but cars coming the other way made room for me. The route was much better for towing than the route suggested by the sat-nav. 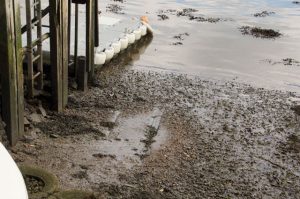 In contrast my return journey without the boat was a nightmare with long queues on the M4; in the end I cut across Salisbury Plain, passing close to Stonehenge. It seems odd without Seatern at the jetty. Where she had been was fairly smooth mud but there are lots of stones and broken bricks round about the area following the winter storms in early 2014 which lowered the foreshore. I must do a bit of raking before Seatern returns.