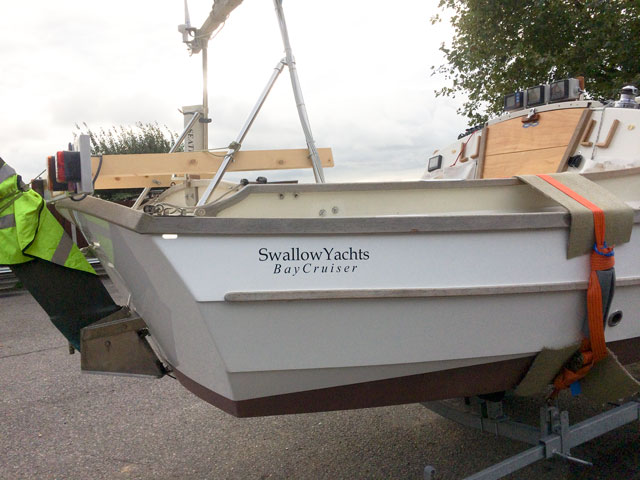 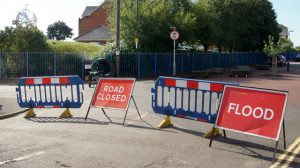 Jonny who was organising the work on Seatern at what is now “Swallow Yachts” had said they needed her until 21st August. However on the 22nd August there was to be a “Flood Dry Run” in Priory Road. It would be both embarrassing and impractical to arrive with Seatern on the 22nd to find the roads closed for the Dry Run …in which I was supposed to be involved! If I collected Seatern on the 24th the neap tides in Southampton meant a difficult launch window, also I had an arrangement to take two friends sailing that week and didn’t want to let them down. 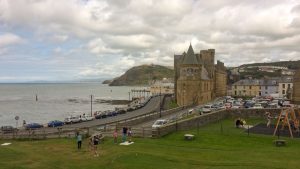 Fortunately as the date approached Jonny said they might have Seatern ready slightly earlier and I arranged to collect her late afternoon on Thursday 20th August which would allow me to launch her on the afternoon tide on the 21st.
With the whole day to drive to Gwbert Road I decided to visit Aberystwyth on route – having never been there. However I also wanted to choose a place to park overnight during the return. I ended up looking at Aust, Magor, and Sarn Park services before heading north to Aberdare and hence the A470 past Brecon to follow the top part of the River Wye, hence the A44 to Aberystwyth. 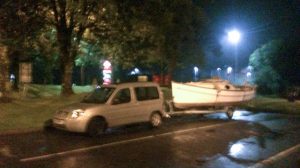 I arrived at Swallow Yachts a bit before 1600. Seatern was almost ready, just needing her name stickers applied and to be wheeled out and fastened to the trailer – all of which was done for me. I left before 1700 to be greeted by a down pour on the road between Cardigan and Narberth. It was still raining heavily as I approached the M4 and the radio was saying that eastbound traffic was stop-go in the Swansea and Cardiff areas.
I decided to stop at the Pont Abraham services where I knew that there was a reasonably quite spot in the HGV parking area where I could spend the night. £21 to park but £23 with a £10 food voucher, so I took the latter and had a larger plate of fish and chips! I discovered that rain had blown under the hatch and soaked parts of the cabin cushions. The night was very warm and humid but the continuous rain drowned out the traffic noise so I got to sleep early and rose at 3am to continue the drive. 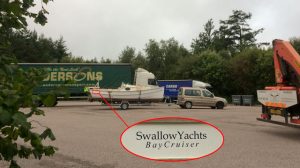 Having stopped off at Tothill Services to use the loos and grab a very poor bacon roll I got back to Southampton at about 0720. I couldn’t figure out how to back Seatern onto the Public Hard given the parked cars in the road so gave up after a few attempts and drove in forwards. I then had until about 1420 before there would be enough water at the jetty to bring Seatern home. 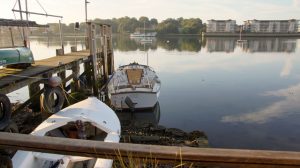 During the day the wind increased to 6 to 8 m/s and I worried whether the Torqeedo would have enough power; however given that Seatern had no mast or rigging I decided to risk it rather than use “Dai”, my 6hp Tohatsu. Jon Tipple helped me launch her to the side of the central part of the hard – I’d failed to line up with the latter despite several attempts. The tide was just at the step so we didn’t get the trailer wheels wet at all. However I wasn’t thinking straight and undid the winch cable before Seatern was in the water which meant Jon (who was holding the painter) got dragged into the water as Seatern launched lifeboat fashion! Otherwise all went well and Seatern was back at the jetty!