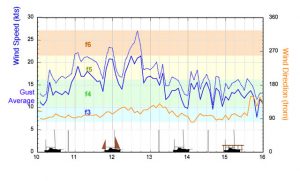 High pressure over the UK and at last some “summer” weather. However the isobars are squeezed along the south coast with some strong easterlies in the forecast, today (Monday 28th) looked the least strong so I decided on a short single-tide sail.

The wind was blowing Seatern away from the jetty and I failed to flick the last warp from the pontoon mooring cleat and dropped it into the water. I shoved Dai into neutral in case the warp got near the prop whereupon he stalled… not a good start! Once under Northam Bridge a gust at Chessel Bay caused Seatern to heel with the windage on the mast alone. I was feeling a bit lazy so that (and the weather forecast) decided me to try sailing with jib and mizzen only on this trip – as it turned out that was plenty of sail for the conditions.

Unfurled the sails past the Itchen Bridge and hardened up once past Woolston Pier. With the spring tide still flooding I wasn’t going to clear the moored yachts so tacked back and then missed the next tack. Seatern was in danger of getting carried back into the pier so I gybed around to avoid running out of space… at which point the mizzen boom came adrift. One of those days! 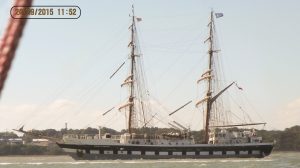 The training ship Stavros S Niarchos was leaving Hythe and passed the in bound Blade Runner which brings wind turbine blades from the factory on the Isle of Wight – old and new wind power. Seatern was heeling in the stronger gusts while in the lulls she was freed off appreciably. I did a long tack towards the shipping lane before tacking back towards shore. Seatern seemed to be pointing well and was up around 4 kts (GPS) despite the lack of main sail and an adverse component to the current. 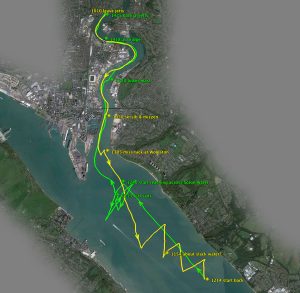 The track plot shows I was loosing ground tacking – I was having to use the mizzen to get her around through the chop. The tacking angles were less than 90 degrees but the tide was still flooding. Towards the end of the beat (near Netley) the tacking angle got larger and Seatern reached 5 kts on the GPS. I assume that indicated the turn off the tide. Seatern was certainly showing a good turn of speed in the gusts which the Dock Head anemometer suggested were well into force 6, possibly approaching force 7 at maximum.

An approaching cruiser looked like the owner had got carried away while visiting the electronics stands at the Boat Show! From the photo I realise it was the Raymarine test-bed boat which I’ve seen up the Hamble in the past. I went about off Netley Dome and started to broad reach/run back. 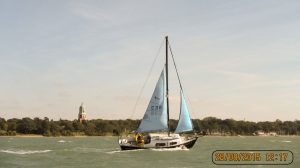 A small yacht with well reefed blue sails beat past and bucked wildly on reaching an approaching wake. I dropped the camera and took over from Ray (the Tiller Pilot) who doesn’t like swells approaching on the quarter. The wake seemed longer period than usual from the Red Jets and for a minute or so Seatern was surfing the forward faces, great fun! 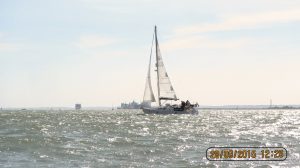 Having eaten a couple of jam sandwiches for lunch I got back near Woolston by 1240 and decided to try reaching across to Hyde. The wind now decreased so Seatern was down to 3 to 4 kts. However her tracks were similar in direction to what I’d previously achieved when beating, confirming that the tide had definitely turned. After two or three reaches I furled the sails and started to motor back. 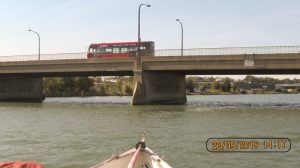 The large “Split 2” barge came up behind me so I pulled across to the east side of the river before dropping the mast. Given the height of the tide I dawdled back to Northam Bridge, however there was plenty of clearance – we do have over 1030mb pressure afterall. Managed to “park” Seatern gently head on to the pontoon with Dai holding her there against the wind. She then blew around into position by the jetty. On reflection I was very pleased how well Seatern had sailed under jib and mizzen – and the helm is certainly lighter than with all three sails set!

Seatern Diaries > 2015 > Sailing Log > 28th Sept: Jib and Mizzen on Southampton Water
Because we use Google Maps and other services, using our site may place cookies on your computer. If you continue to use this site we will assume that you are happy with it.Ok