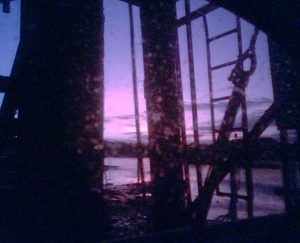 Last night I got woken by the CO alarm again. I think the problem is when it’s mild outside and I have the heater on very low. The chimney does not get warm enough and some fumes get into the cabin. These stick around even after I stop using the heater, so later in the night the CO alarm decides the integrated exposure is getting too high and wakes me up. Reassuring that it works but annoying all the same. In future I’ll have to use the heater in such a way that the chimney gets warm enough. It won’t be a problem when the weather is colder! 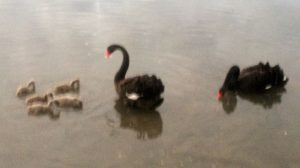 The rather indistinct photo of dawn  is an attempt to show why I sometimes sleep in the boat. It’s lovely to wake in the morning looking out at the river. The dawn can be viewed from the quarter-berth looking through the piers of the jetty. The photo was taken in dim morning light using my iphone – as was the photo of the swan family that same morning. 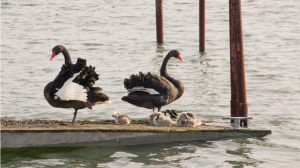 Over the years we have had a single black swan on the river now and again. However this year there have been three and, rather late in the year, two have produced a family. Here’s a photo taken in better light with a proper camera! No doubt the swans think that it’s about to be summer, as it would be in Australia. It seems unlikely that the cygnets will survive, they don’t seem to be growing very fast. people give them bread but there’s not the natural food around that there would be in spring. 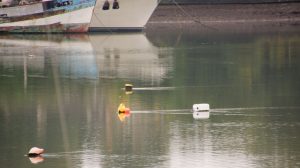 On the same morning as the swan photo we were preparing for a large tide – around 5m. The photo was taken during the flood but actually shows the surface water flowing out to sea! Admittedly this was around the time of the half-tide stand*, but it is a normal occurence in this part of the river. The fresh river water flows out at the surface while the sea water comes in beneath it. It’s known as “estuarine circulation”. For almost all the tidal cycle the surface water flows seaward.

(* during spring tides in the Southampton area there is period about two hours after low water when the rise of sea level slackens off and may even reverse. This “young flood” or “half tide” stand lasts a couple of hours and then the rest of the flood continues apace.)