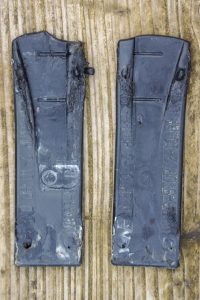 The pads removed from the outboard well side.

It’s spring tides so, once the rain stopped, I decided to put my outboard “Dai” back on Seatern following its annual service. I decided to try to remove the “rubber” pad on the outboard well side of the Vibra-stop mounts. These have deformed in use and removing them will make mounting and dis-mounting Dai much easier. It looks as if they have softened with the heat from the motor but I suppose it was actually slow creep caused by the pressure and, ironically, the vibration. Given that they have compressed, it makes me wonder how well clamped Dai was. However removing Dai was hard enough, so possibly the inboard pads had expanded beneath the outboard clamping screws to keep Dai firmly fixed.

I thought I’d have to chip the pads away but, in the event, they came away from the alloy base of the mounts very easily in one piece. I also removed the upper two screws fastening the Vibra-stop pads to the boat, filled the screw holes with sealant, and put some black “duct-tape” over the alloy to avoid metal to metal contact.

Before putting Dai in place I tried to clean some of the “mud banks” from inside the outboard well. The stirred up water made seeing how I was getting on difficult. As I tried to clear the muddied water, anyone watching would, at one point, have seen me trying to bail out the outboard well while Seatern was afloat; no doubt confirming any suspicions about my mental state!

Seatern Diaries > 2018 > About Seatern > 19th February: Mounted Outboard on Seatern
Because we use Google Maps and other services, using our site may place cookies on your computer. If you continue to use this site we will assume that you are happy with it.Ok