New Outboard: The weather over the weekend was force 7’s off and on which started me thinking about rough weather options. As a result, I finally decided to give up on the Torqeedo. I’ve ordered a 6hp Tohatsu from the Rib Shop – they are local and the price seemed competitive.

Note on Navigation: Normally I’m expecting to rely on the chart plotter to tell me where I am. As long as it is working I don’t plan to “navigate” as such, although pilotage is of course still necessary when required.What if the chart plotter goes wrong? In fact, nowadays it almost seems like every device in the boat (except me) knows where it is thanks to GPS. Thus, if the chart plotter breaks down the AIS beacon gives me a lat and long position which is displayed on the VHF radio. If either of them are also not working, for example, the 12V supply has failed, then the handheld VHF, my waterproof camera, and my iPhone (in waterproof case) are all battery powered devices capable of telling me my position*. So provided the GPS system is working I should know my position, and I do carry paper charts on which to plot it!

What if the GPS system stops working? There seems little chance of it and the Russian and European counterparts being “turned off” – too many systems rely on it. However it is certainly possible that a solar storm could disable it. The symptom of something being wrong would be that GPS derived velocities would become highly erratic, or the devices would complain that they couldn’t get a fix. The chart plotter displays the track, and it should be possible to work out where the positions started going wrong and I also take photos and I could use the position information recorded in these to determine my last reliably known position. To determine new position estimates I have charts and a sighting compass (which is in addition to the boat’s fixed compass and the iPhone compass app). I also carry OS maps covering the coast since I would be more confident in identifying a landmark on these in order to take a bearing, rather than doing the same from a chart. So as long as I can see land I think I should be able to determine my position OK!
——————————-
* The Compass “app” which comes as standard on the iPhone gives the lat/long position as well as being a very effective sighting compass. Line it up on a land mark and tap the screen, then take it away from your eye to read the position. Tap again to clear. I did have to discover how to get the camera to tell the position to me rather than keep it to itself!

Chart Table: Watching the fireworks for the QM2’s birthday from inside Seatern (while moored to the jetty) I really needed to be able to lean back on the electric switchboard to see out of the oval window. This prompted me to make the cover which I had originally planned and then decided against. I then realised that it could also double as a chart table. I’m not likely to use it much as a chart table at sea since I don’t expect to do much navigating [explanation!]. However I think it will be useful when preparing pilotage for a trip or entering way marks into the chart plotter. I’m really pleased with the result.

When stowed the backrest clips out of the way. The chart table support either swings back against the original seat back or it can be removed. As a backrest it is supported by a wooden block screwed to the original seat back on the outboard side, and by the fold-away leg on the inboard side. The angle keeps it clear of the Echomax unit and the VHF microphone. When used as a chart table the Garmin chartplotter can be slotted into a holder just above it. This was my original “nighttime” place for the Garmin allowing the anchor alarm to be set while I sleep. The chart case was my original “chart table” which allows the chart to be used in the cockpit while sailing. 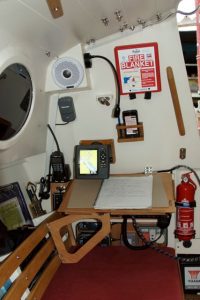 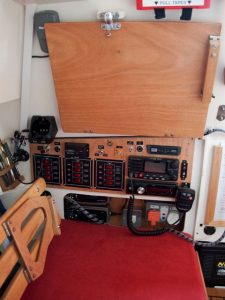 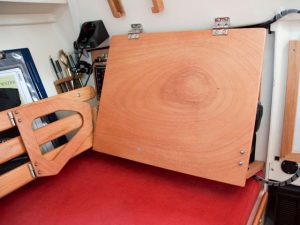 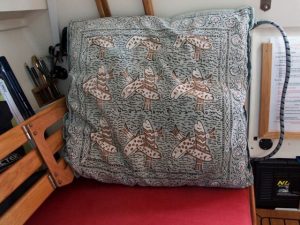 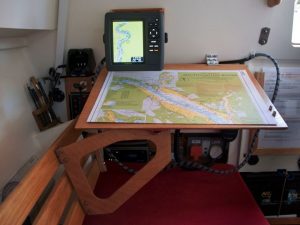 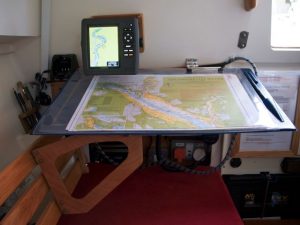 (Note added 29th July 2014: I do actually use it when sailing for noting events in my rough log; these later form the basis for diary entries on this web site. Since taking the original photos I’ve added non-slip matting and a low fiddle around the table to stop my logbook falling off. I’ve also got a pen and iPhone holder positioned right of the chart-plotter mounts. The photo shows the present configuration, the iPhone is showing the Met Office surface pressure chart!)